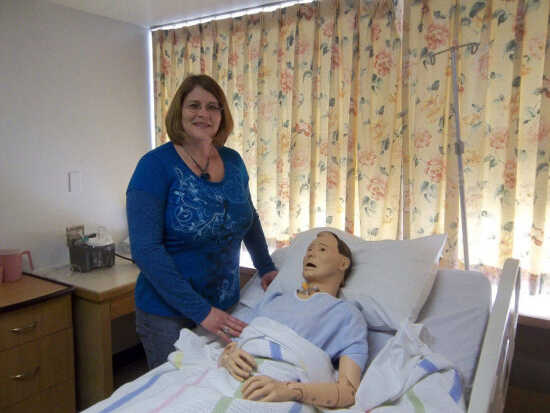 Kim Bowen, a mother of three and grandmother of three, will graduate in May from Fort Scott Community College's nursing program. It's been a long road for the Paola resident, but she's close to attaining her dream. Here she's seen with one of the mannequins students work with in the nursing program at FSCC's Burke Street Campus. The campus is the former site of Mercy Hospital.

FORT SCOTT, Kan. --As far back as she can remember, caring for people has been Kim Bowen's passion. Life sidetracked her along the way, but she kept at it and will graduate in May from Fort Scott Community College's nursing program.

"I've been destined to be a nurse probably since I was a little kid because my favorite game was to bandage my puppies and dolls," said the mother of three and grandmother of three. During her senior year of high school, she was exposed to nursing and "really loved it," Bowen said.

"As soon as I graduated, I decided I wanted to get my RN" (registered nurse) degree. But soon afterward, she found out she was pregnant with the first of three daughters.

A couple of years later, the Paola resident got her medical assistant's certification, but she was never in a position to go to school full time.

"I always worked two jobs," said Bowen, who has her own housecleaning business and works as a part-time janitor at the First Baptist Church in Louisburg.

She worked for Novartis, an animal vaccine firm, until it closed in 2009. "At first it kind of blew the wind out of my sails," she said, "but I've always been optimistic."

Getting another job in the animal vaccine area would have meant obtaining a degree and by that time her medical certification had run out.

Unsure what to do, she prayed about it. Soon afterward she received a brochure in the mail for FSCC's nursing program and went to the Paola campus to talk to Counselor Art Houser.

She attends most classes on the Paola campus through Interactive Distance Learning -- like videoconferencing. But she comes to Fort Scott for labs.

"I was able to get grants and scholarships and it all fell into place," said Bowen.

"I had to start over and test to see where I would place. Art set the ground rules and got me started on the right foot. It seemed like that was what I was supposed to do."

Having supported herself for so long, Bowen found herself lacking funds. But obtaining grants and scholarships like one from Mercy Health Auxiliary helped. It's recommended that nursing students only work 20 hours a week.

"I've been challenged at times, wondering if I could make it work," she said, noting that she does clinicals at Mercy, Pittsburg, Girard and Nevada.

"The professors are good about helping you understand."

Married for 30 years, Bowen and her husband Tom, a paint contractor, have three daughters, Amanda Dunn, a chiropractor at Blue Valley Chiropractic in Overland Park; Audrey Bowen, a certified nursing assistant at Vintage Park assisted living facility in Louisburg; and Ashley Bowen, who is attending Johnson County Community College to get her prerequisites for elementary education.

The grandchildren are Amanda's kids, 5-year-old Lexi Dunn and 6-month-old Jayvan Dunn; and 2-1/2-year-old Mia Bowen, who is Audrey's child.

Kim Bowen has always put her family first and said her new life as a nurse will extend that ideal.

"This was my time to achieve my dreams and set an example for my kids and grandkids," she said.