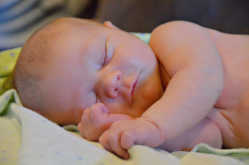 Keb and Amanda Walters of Lamar, Mo., are proud to announce the birth of their son, Balum Alan Walters.