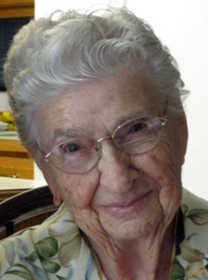 Mrs. Levaugh graduated from the eigth grade from Ferry School in Milo, in April of 1927. She married John Franklin Levaugh on Feb. 12, 1930, in Adrian, Mo. On Dec. 19, 1935, she gave birth to identical twin daughters, Charlene and Allene. She was a member of the Community Christian Church in Nevada. John and Anna Lee farmed for more than 60 years in Vernon County near Milo, and were married for more than 67 years.

Visitation is Thursday, Sept. 6, at Ferry Funeral Home in Nevada, from 10-11 a.m., with a graveside service following at the Milo Cemetery in Milo, with the Rev. Bill Platt officiating.

Contributions may be made to the Milo Cemetery Association, in care of Ferry Funeral Home.