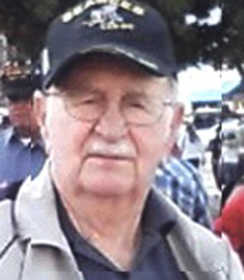 Don was reared in Nevada, and was a member of the high school class of 1945. He joined the service at the age of 17, prior to graduation and was with the Navy SeaBees from 1946-'50. As a young boy he had worked at Stumps Shoe Store shining shoes. After the service, Don worked for Davisson Shoes in Nevada for a number of years and then for Mass Merchandising where he retired after working more than 30 years. Later he worked at Wal-Mart for a number of years. Don's memberships included the First Baptist Church, the United Methodist Church, and the Nevada BPO Elks Lodge No. 564.

Funeral services will be held at 10:30 a.m., today, Jan. 3, at Ferry Funeral Home, Nevada, with Steve Russ officiating. Interment with military rights will follow in Moore Cemetery, Nevada. Friends may call now until the hour of service and the family received friends from 7-8 p.m., Wednesday, Jan. 2.

Contributions may be made in Don's memory to the ALS Association in care of Ferry Funeral Home, 301 S. Washington, Nevada.