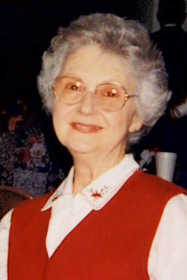 Alice Mae Palmer, 82, resident of Nevada, Mo., died Monday, Feb. 25, 2013, at the Moore-Few Care Center in Nevada. She was born July 11, 1930, in Richards, Mo., the daughter of Cecil Aaron Burchett and Julia Angeline Lowry Burchett. She graduated from Richards High School. She married Edgar Eugene Palmer on Nov. 24, 1949, in Nevada. He preceded her in death on Mach 12, 1986. She worked for J.C. Penney Company as a clerk for 13 years before retiring. Alice was a strong supporter of Habitat for Humanity in Vernon County. She was a member of the First Christian Church in Nevada. She was the spiritual and emotional leader of her family.