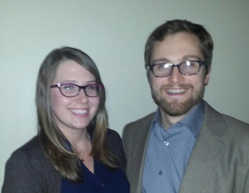 Drs. Ted and Candice Moore are pleased to announce the engagement of their son, Michael Ted Moore Jr., to Anne Scarlet Lemoine of New Orleans.

Michael graduated from Nevada High School in 2003 and Tulane University in 2007. He worked for five years as an investigator of mitigating circumstances on capital punishment cases. He is presently attending Loyola Law School in New Orleans.

Anne is the daughter of Robert Steven and Paulette Sahuque Lemoine of New Orleans, La.

She graduated from Grace King High School in 2005 and the University of New Orleans in 2009. She worked for two years for the Crescent House Healing and Empowerment Center and completed a Masters of Social Work at Tulane University in December of 2012.

A fall wedding is planned.