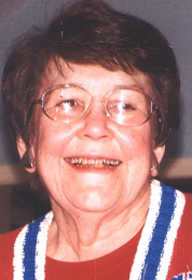 Lynne Gage Logan Clawson passed away Saturday, March 23, 2013, at Kansas City Hospice House, in Kansas City, Mo. She was 79 years old and had been in ill health for several months. She was born Oct. 30, 1933, in Nevada, to George M. and Mariana Logan.

Lynne attended Nevada schools and was a 1951 graduate of Nevada High School. She enjoyed reunions of that particular class which achieved the school's distinctive gold band on the staff of leadership. She was a 1953 graduate of Gulf Park College, Gulfport, Miss., and a 1956 graduate of the University of Kansas with a B.A. in elementary education. Lynne was a lifetime KU alumna member.

On Dec. 17, 1955, she was married in Nevada to Jack D. Clawson, an electrical engineering student at KU. She taught school when the couple lived in Michigan, Texas, North Carolina, and Italy while he was employed privately in missile defense programs for the federal government. When her husband started his own computer electronics firm in Kansas City in 1963, Lynne worked as a bookkeeper for the company until it was dissolved in 2000. The Clawsons celebrated their 50th wedding anniversary at the Savoy Hotel in Kansas City on Dec. 17, 2005. Lynne loved music and accompanied many individuals on the piano during her life. Her grandfather, after whom she was named, bought her a Steinway baby grand piano when she was 13 for winning many competitions throughout Missouri. Her piano teacher, the late George Schumann, said Lynn and NHS classmates, Mary McCaffree and Lucille Haynes, "had the touch" on the keyboard found among "very fine" pianists. She was a loving, compassionate, gracious and congenial lady, active in the Greater Kansas City Chapter, Gamma Phi Beta; member of Chapter GM, P.E.O. Sisterhood, Leawood Methodist Church, and held the oldest membership in Elizabeth Carey Chapter, Daughters of the American Revolution, Nevada.

Funeral services will be held at 2 p.m., Wednesday, March 27, at the United Methodist Church, 500 S. College, in Nevada, with the Rev. Linda Pagel officiating. Interment will follow in Newton Burial Park in Nevada.

Friends may call now and until noon on Wednesday, at Ferry Funeral Home in Nevada, and the family will receive friends at the United Methodist Church Parlor in Nevada, between 1 and 2 p.m., Wednesday, prior to the funeral service.