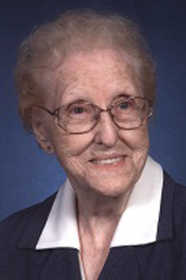 Maudie was a member of South Haven Baptist Church and the Shepherds Flock Sunday school group. One of Maudie's greatest accomplishments besides her son "Jr." was becoming a member of the Daughters of the American Revolution. Following retirement from the American Red Cross, Maudie did a lot of traveling with family and church friends. She was a very accomplished painter of china.

Maudie is survived by her grandchildren, Stephanie Snyder and husband, Blair, and Erik Gawron, all of Springfield, Mo., and Jeremy and Gretchen Gawron, Republic, Mo. She is also survived by her great-grandchildren, Taylor and Connor Shipley, Kirsten, Landry and Stevie Gawron, and Sophia and Savannah Gawron. She is also survived by her sister-in-law, Sheryl Mowry; a dear friend, Jeri Losey; and a host of nieces, nephews and their families. Maudie was preceded in death by her son, Edwin Stephen; her daughter-in-law, Connie; her husband, Clyde; parents; brothers, Earl and Stan Mowry; and sisters, Frances Zwiebel, Lorine Mayes and Mable Urner.

Graveside services will be held at 11 a.m., Friday, at Newton Burial Park, Nevada, with the Rev. Linda Pagel officiating.