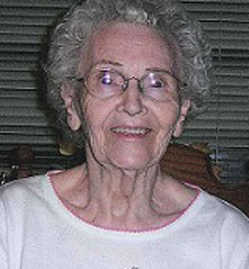 Erna grew up in Kentucky and attended school there. Following her marriage to Gene, they lived in California until his retirement from the service. At that time they moved to Mt. Grove, Mo., for a time before coming to live in the Nevada area in 1968. Erna worked as a Nurses' Aide at the Nevada City Hospital for 10 years until her retirement.

Erna was a member of the Pine Street Baptist Church in Nevada and the Fleet Reserve in Joplin. She enjoyed square dancing and traveling with her husband, growing roses, and tending to her vegetable garden.

Graveside services will be held at 1:30 p.m., Monday, Nov. 4, at Newton Burial Park, in Nevada, with the Rev. Chad Bailey officiating. Friends may call now and until the hour of service at Ferry Funeral Home, Nevada.

Contributions may be made in her name to the Alzheimer's Association in care of Ferry Funeral Home, Nevada.