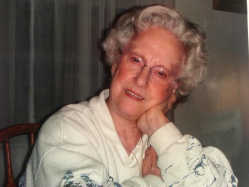 Rosalie Dahmer, born in Fort Scott, Kan., on April 7, 1923, to Elsie Golden Thompson and John Franklin Kramer. She served in the Women's Army Corps as a clerk typist, and this is where her love of knitting first began. She was stationed at the Pentagon, typing orders and death lists until her discharge in 1946. Rosalie married Charles Denton Dahmer on June 29, 1947. They moved to Denver in 1948 and raised their family there. Rosalie and Dent moved to Durango in 1973, where she lived until her death.

She worked in medical records at Mercy Medical Center, as a volunteer and later as an employee until the hospital moved to the Grandview area and she retired at the age of 83. Wanting to continue her connection with Mercy Hospital, Rosalie knitted thousands of baby hats for newborns. She knitted sweaters with matching hats for impoverished children from Appalachia to Azerbaijan, and also in 25 U.S. states.

Rosalie was preceded in death by her husband, Dent, of 52 years; her brother, Donald Kramer, of Seattle, Wash.; and her sister, Madelyn Talbot, of Overland Park, Kan.