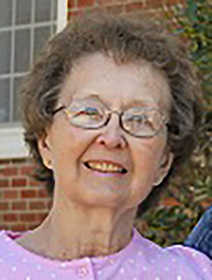 She graduated from Nevada High School in May 1958. She and Gerald Snead began their courtship in the spring of their senior year and continued through letters written during his four years in the Air Force, stationed in France. After his return in 1962 she agreed to marry him and they became engaged in November. They were married at the First Christian Church of Nevada on Feb. 17, 1963.

Mary worked at Bob Lasley Insurance and Real Estate from graduation until their first son, Kenny, was born in November 1963. She then began to work part-time at Gragg's Floral and then transferred to full-time at Darnold's Floral until Mrs. Darnold's retirement. While their boys were in school, Mary served as Cub Scout Leader for Pack 43 for many boys attending Benton School. They met at her house after school for their weekly pack meetings.

She and Gerald also enjoyed league bowling and square dancing for several years. Both boys participated in bowling leagues and tournaments and the family could be found going to tournaments around the area. Kenny and Randy also played baseball and wrestled so she and Gerald could also be found wherever the boys were playing.

After Mrs. Darnold's retirement Mary began working as Dr. Tom Bunton's receptionist until her retirement in 2001. Mary had many passions, she enjoyed crocheting and crafting which she was able to share with her first grandchild, Merissa, the girl she had always wanted. She spent countless hours researching genealogy with her son, Randy, tracking down leads as to where her family had originated.

She and Gerald had planned to travel extensively during their retirement years; however, those plans were changed due to his cerebral aneurysm and stroke. She then became his caregiver and head cheerleader for his recovery. Those that know them marveled at her perseverance and courage in working with him to regain his mobility. After his recovery they enjoyed day trips around the area. If she heard of something interesting they went to see it. She never shied away from an adventure for them. Their family never knew where they might be when they called.

When grandson Brett began showing livestock in 2006, they were always there to be his cheering section and personal photographer. She also took Gerald and Brett on long distance driving trips to Yellowstone National Park, The Smokey Mountains and Massachusetts making lots of stops along the way at any place that sounded interesting. Last year they took Brett and traveled with son, Randy, and family on a cruise to Alaska.

Lately they enjoyed spending time at the Franklin P. Norman Community Center with the morning walkers and coffee drinkers. Mary was also a 50-year member of the Rebekah Lodge.

Mary is survived by her husband, Gerald; sons Kenny (Marla), of Nevada, and Randy (Joann), of Lowell, Mass.; grandchildren, Brett, of Nevada, and Merissa, of Lowell; and her adopted cat, Tori, that she rescued after the Joplin tornado. Also surviving is one brother, George Lolley; niece, Becky Dysart; and nephews George William, David and Bobby Lolley.

Graveside services will be held at Moore Cemetery at 10 a.m., Wednesday, May 14. Visitation will be at Ferry Funeral Home from 6 to 7 p.m., Tuesday. The Rebekah Lodge Funeral Service will be held during visitation at 6:30 pm.

Memorials in lieu of flowers are suggested to the Cedar-Vernon County Genealogical Society in care of Ferry Funeral Home, 301 S. Washington St., Nevada.