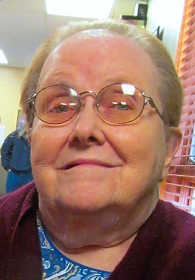 Gene was born Dec. 20, 1930, in Nevada, Mo., the only daughter of Elmer Goldsmith Keithly and Sula Maude Canole Keithly. She graduated from Pittsburg High School in 1949.

Gene's first employment was as a school teacher in a one-room school house in rural Missouri. She worked with her husband in his custodial-lawn maintenance company, Hook Maintenance Company, in the greater Kansas City area for 30 years. Gene enjoyed cooking and was the cook for Leawood Baptist Church, Leawood, Kan. She was the Louisburg Senior Citizens director for several years after moving to Louisburg. Her greatest joy was being a stay-at-home mom, while raising her four children.

Gene was a member of the Louisburg First Baptist Church since 1974, serving as a deaconess, church clerk, and Sunday school teacher. She played the cello and shared her love for music with each of her children. She served as the leader of each of her daughters' Girl Scout troops and of her son's Boy Scout Den. She spent many years researching her family's genealogy and was quite proud of the information she discovered.

Gene was an avid reader and missed that the most during her final months. She enjoyed the trivia sessions at Evergreen and listening to her country music. Gene's greatest love was her family, and her grandchildren and great-grandchildren were her pride and joy.

Gene was preceded in death by her parents; husband, Tom; two older brothers, Gene and Leon Keithly; their wives, Alice and Helen; and one nephew, Olen Keithly.

She is survived by one son, Jerry and wife, Jan, Independence, Mo.; three daughters, Joann Hook and Lori Cutshaw, Louisburg, and Donna Davis and husband, Jim, Olathe, Kan.; nine grandchildren and spouses; 12 great-grandchildren; and many nieces, nephews, and friends.

In lieu of flowers, contributions may be made to Evergreen Community of Johnson County, Country Lane Unit.

To leave a special message for the family online, visit www.PenwellGabelLouisburg.com.