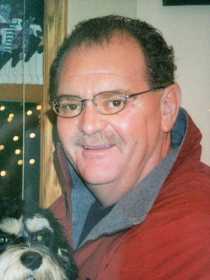 Wesley Kevin Klinkhammer, known to friends and family as "Klink", was born Dec. 19, 1951, to Raymond Kaiser and Lucine (Bowling) Klinkhammer in Mitchell, S.D.

Surrounded by his wife, children and niece, Kelly Jean Ast (Meyers), he passed away on Aug. 25, at Cox Hospital, in Springfield, Mo., after a courageous 10 month battle with brain and lung cancer. He was married to his best friend Deborah Schulz on June 2, 1978, in Mitchell S.D. To this union were born two blessings, Jon Paul and Jessica Rae.

Wes retired on March 1, 2012, after a 35-year career with 3M. Wes and family called many different places throughout the country "home" as part of his career with 3M, including Nevada, Mo., Bristol, Pa., Springfield, Mo., Bedford Park, Ill., Greenville, S.C., St. Paul, Minn., (3M Head Quarters), Cottage Grove, Minn., and retired while in Austin, Texas. Although he may have always laughed at himself as being a fish out of water with modern day technology, when it came to understanding and caring about people, he was a renaissance man.

After retirement Wes held firm to the thought that he would not be going any farther north than Missouri, so Wes and Deb moved back to Springfield, Mo., to be closer to friends and family. He was an avid Cubs fan, and cheered for the Green Bay Packers. He loved sports, travel, and sightseeing, but golf was always his favorite pastime.

He leaves behind his wife of 36 years, Deborah; two children, Jon Paul and Jessica, of Overland Park, Kan.; as well as his beloved pet, Bailey; his brother and sister-in-law, Roger and Mary Lou Klinkhammer, of Shoreview, Minn.; mother-in-law, Mandy Schulz, of Woonsocket, S.D.; brother-in-law, Jack Schulz Jr. and his wife, Penny, of Woonsocket, S.D.; sister-in-law, Delite Klinkhammer, of Colorado; and numerous nieces and nephews, many 3M'ers, and friends. Preceding him in death are his dad and mom, Raymond Kaiser and Lucine Klinkhammer; father-in-law, Jack Schulz Sr.; brother, Kurtis; nephew, Kaiser Klinkhammer; as well as dear family friend, Jean Marie Meyers.

To meet him, was to know him. To know him, was to love him. Wes left a little piece of himself in every person he touched. We are better people for having known him, and the world is a much better place because he was here for this far too brief moment in time.

Memorial services will be held in Springfield, Mo., at Gorman-Scharpf Funeral Home, and a funeral mass will be at 9 a.m., in Mitchell, S.D., at Holy Family.