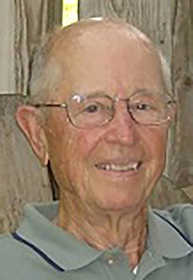 Dr. Ira Ellis Spencer, longtime optometrist and businessman in Nevada, Mo., recently residing in Fort Scott, Kan., passed away Monday, Sept. 8, 2014, at Mercy Hospital, in Fort Scott. He was born Sept. 19, 1926, in Walker, the son of Elmer and Martha Odessa (Gilbert) Spencer. On Dec. 15, 1945, he was united in marriage to Elizabeth (Betty) Nadine Simpson and she preceded him in death on June 10, 2012. Together the couple became parents of three children.

Dr. Spencer was raised in the Walker area, then at age of 12 moved, along with his family, to Nevada. Shortly after, and still at age 12 he began working at Karbe's Grocery in the meat department. He graduated from Nevada High School in 1944, then served our country in the United States Army for two years. He served for a time with the occupied forces in France during 1945. As he was preparing for military duty, he happened to be back in Nevada with another military buddy when he saw Betty Simpson step out of Flory's Pharmacy and the rest, as they say, is history. The two guys hitched a ride with the two ladies and just short of six weeks later he and Betty were married by a Justice of the Peace in Fort Scott. But to make the story more interesting, he was gone four of the six weeks of courtship with the military.

After his commitment, he and Betty moved to Memphis, Tenn., where he attended Southern College of Optometry, graduated, then taught for two years before moving back to Nevada in 1954 to make it the family's permanent home. He was in private practice for a year before joining O.W. Dodge and together they worked until Dr. Dodge's retirement. He joined with Dr. R.J. Hatch in the mid-1960s, continuing to practice until his own retirement in 1992. In what spare time he had he enjoyed golf, and together he and Betty traveled, spending summer vacations in Colorado and Florida, while also making trips to Hawaii and Europe.

Locally they did volunteer work with delivery of Meals on Wheels and assisting with the United Methodist Women's Bazaar. Aside from his love of golf, he also enjoyed fishing with the grandchildren, and was very well known for his sense of humor and extremely dry wit. He and Betty spent 66 and 1/2 years together and were members of the United Methodist Church since their marriage. He was also a longtime member of the Nevada Country Club and the American Optometric Association.

Memorial services for Dr. Ira Ellis Spencer are scheduled for 11 a.m., Thursday, Sept. 11, at the United Methodist Church, in Nevada, with Bob Beaver officiating. Visitation is scheduled just prior to the service from 10 to 11 a.m., also at the church. Interment will be held privately at the Evergreen Cemetery in Fort Scott.

Contributions may be made in Dr. Spencer's memory to the United Methodist Church in care of Ferry Funeral Home.