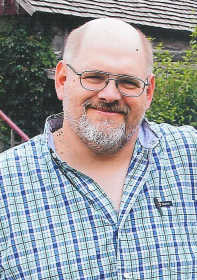 Doug came to Sheldon in 1983 with his family and graduated from Sheldon High in 1986. Doug worked at various businesses including Producer's Grain in Nevada, Peerless Products in Fort Scott, Kan., and Nevada Building Supply for a number of years. He was currently employed by W.F. Norman Corporation in Nevada. Doug was an avid deer hunter, enjoyed boating, and loved spending time with his family.

Survivors in addition to his wife, Jeannie, include one daughter, Ashley Beeman, of the home and her fiancé, Kurtis Robinson and his son, William; one son, Zachary Beeman of the home; his mother, Joy Beeman, Milo, Mo.; one sister, Eve Beeman, Nevada; and several nieces, nephews, and his best friend -- his dog, Duke.

Funeral services will be held at 10:30 a.m., Tuesday, Sept. 16, at Ferry Funeral Home, Nevada, with the Revs. Roger Todd and Mike Satterlee officiating. The family receives friends from 9 to 10:30 a.m., Tuesday, prior to the service at the funeral home. Friends may call from noon, Saturday, until the hour of service. Interment will follow in Newton Burial Park, Nevada.

Contributions may be made in his memory to the American Diabetes Association or Ronald McDonald House in care of Ferry Funeral Home, 301 S. Washington, Nevada.