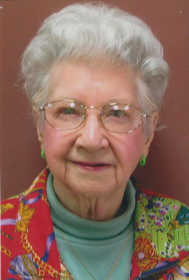 Mary Virginia (Corporon) Shead, 95, of Arcadia, Kan., took her journey to heaven on Sept. 14, 2014. Surrounded by family members and friends, Mary Virginia (also known as Mimi) spent her final hours on Sunday at the Mercy Hospital in Fort Scott.

The day before she had watched the Old Settler's Parade in Arcadia. On Saturday, she also had visited with the many visitors who stopped by the Shead Stead Farm where she has lived for the last 21 months. During her stay at the farm, her memorable time was spent with great-grandchildren running into her room at various times to show her their toys, read her many books, and play games with her. She was a tremendous help with many jobs that she found she was able to do. All of her days of her life were rich and full of family, community and church.

She was born on the Corporon Hill, Arcadia, Kan., on Dec. 11, 1918, to G.W. and Portteus Stephens Corporon. She was a member of the Arcadia Christian Church from her youth where she taught children's Sunday school class for many years. She was the first president of the JOY Sunday School Class and many years served as Class Ten secretary. She was a member of the Autumn Leaves Senior Citizens in Arcadia.

For 45 years, Mary Virginia has been known as the writer of the "Arcadia News" in five of the area newspapers: The Fort Scott Tribune, Liberal News, Pittsburg Morning Sun, Nevada Daily Mail, as well as the former Girard Press. She started writing for these papers in 1969 at the time of her father's death, who had written for those papers previously.

On Dec. 9, 1945, she married Paul Edward Shead at the rural Garland, Burckley family farm, where she lived her last days with her son, Larry and his wife, Vickie.

From May 1946, the couple owned and operated Shead's Service until the death of Paul Shead in 1985.

She is survived by two sons, Larry Paul Shead and wife, Vickie, of rural Garland, and Ralph Edward Shead and wife, Cindy, of Carl Junction, Mo.; four granddaughters and three grandsons and their spouses; and 11 great-grandchildren. Three brothers still living are Jack Corporon and his wife Harriet of Brooklyn, N.Y., Nelson Corporon, of Lexington, Mo., and Charles Corporon of Pittsburg, Kan. There are many nieces and nephews.

Funeral services will be at 11 a.m. Saturday, Sept. 20, at the Arcadia Christian Church in Arcadia, with the Rev. Charles Cable and the Rev. Leon Weece officiating. Burial will be on Monday at the National Cemetery at Fort Scott, Kan. The family will receive friends from 6 to 7 p.m. Friday at the Bedene Funeral Home at Arma, Kan., where friends may call after 10 a.m. Friday at the Bedene Chapel in Arma. Memorial funds may be given to Reach World Mission or Literature and Teaching Ministries (LATM), two ministries she faithfully supported. Memorials may be sent to or left at the Bedene Funeral Home, 517 E. Washington, Box 621, Arma, KS 66712.