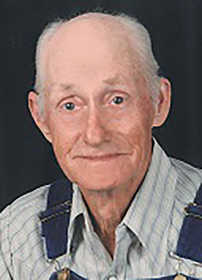 Kenny was raised in Deerfield and attended school in Nevada. He then served in the United States Army from November 1942 until January 1946, during World War II, in the Western Pacific as a landing craft operator. While in Siapan, Kenny was injured and later received a Purple Heart and two Bronze Stars. Following his time in the service Kenny returned to Deerfield to farm. He later worked for M.K.T. Railroad for 11 years and then worked for Lawrence and Son's Sawmill in Deerfield for 30 years, until his retirement. He was a lifelong resident of Deerfield. Kenny was a past member of the VFW, Nevada.

Graveside services will be held at 2 p.m., Friday, Nov. 21, at Deerfield Cemetery, in Deerfield, Mo., with the Rev. Bill Smith officiating. The family will receive friends from 6 to 7 p.m., Thursday, at Ferry Funeral Home, Nevada.

Contributions may be made in his name to the Deerfield Cemetery Association in care of Ferry Funeral Home.