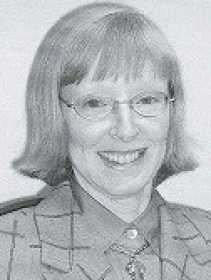 Susan Lane Callahan passed away April 20, 2015. Susan was a long-time resident of Nevada and faculty member at Cottey College, where she had taught mathematics since 1980.

Susan was born in Kansas City, Mo., and earned B.S. and M.S. degrees in mathematics from Missouri University of Science and Technology (formerly the University of Missouri-Rolla). She joined the Cottey faculty immediately upon graduation and, in addition to her teaching, served at various times as chair of the faculty and the Rank and Tenure Committee, chair of the Math and Science Division, and coordinator of the math department.

Susan received numerous recognitions for her dedication and excellence. She received the Missouri Governor's Award for Excellence in Teaching in 2002. She earned her Cottey's Master Educator Award in 1996; was designated an Honorary Alumna by the Cottey College Alumnae Association during Founder's Day in 2015; and was recently elected by the faculty as the 2015-17 Blanche Hinman Dow Honored Speaker.

Susan was an active member of the Cottey community, most notably through playing and performing in Cottey music ensembles for more than 30 years. She also enjoyed physical activity and participated in wellness activities including yoga, Zumba, and toning and flexibility.  Susan was a member of the Mathematical Association of America and served in many leadership positions for that organization, including election to the national Board of Governors. She was a member of Soroptimist International of Nevada, Mo., serving at times as president and as a member of the board of directors. She was secretary-treasurer of the Drywood Crest Homeowners Association.

Susan also was involved in a variety of other organizations, such as the University of Missouri-Rolla alumni association; and she contributed to community activities by, for example, serving as a judge at the Nevada High School Speech and Debate Festival and playing clarinet in the El Dorado Springs Municipal Band.

Susan enjoyed hiking in national parks, visiting historical sites, riding and being around horses, attempting household repairs, and spending time with her two cats -- which she named after noted female mathematicians. She had several of her pieces of needlework framed and hanging in her office.

Susan is survived by her mother, Dora, of Kansas City, Mo.; her sister, Margaret, of West Des Moines, Iowa; and several uncles and cousins.

Susan's friends and family will be gathering for a memorial service Friday, May 8, at 4 p.m., in the Chapel at Cottey College. Interment will be held in Mount Moriah Cemetery, Kansas City, Mo., at a later date.  Contributions in Susan's memory can be made to Cottey College (1000 W. Austin Blvd., Nevada, MO, 64772), with designation to the Susan L. Callahan Mathematics Scholarship.