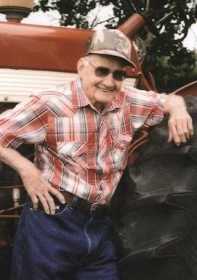 Ivan was raised in Lenora. In 1960, he came to the Moundville area where he farmed and raised livestock all his working life. Ivan also spent several years working at Potter's 66 Station in Nevada. After retiring from farming he owned and operated Diggins Store, in Moundville, from 1979-92. He was a member of the Sylvan Dale Baptist Church, in Moundville.

Funeral services will be held at 10 a.m., Friday, June 12, at Ferry Funeral Home, in Nevada, with Chaplain Dennis Painter officiating. Interment will follow in Sheldon Cemetery, Sheldon, Mo. The family will receive friends from 7 to 8 p.m., Thursday, at the funeral home.

Memorial contributions may be made in his memory to NRMC Hospice in care of Ferry Funeral Home.