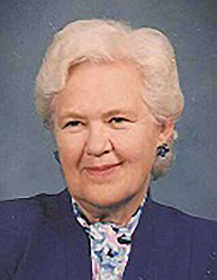 Lola was born April 28, 1931, in Loup City, Neb., the daughter of Hubert Lawrence and Abbie Lulu (Conger) Hardesty. At an early age she moved to the northwest area of the U.S. Lola attended and graduated from Nevada High School in 1948, and was married to William David Flemming for 62 years before he preceded her in death.

Mrs. Flemming was a lifelong church member and very active in her local church. For many years she was a leader in the women's organization on the local, state and regional level. She had been a member of the Oakville Baptist Church in St. Louis, Mo.

Graveside services are planned in Nevada at 1:30 p.m., Thursday, July 2, at Moore Cemetery, Nevada, with arrangements under the direction of the Ferry Funeral Home.

In lieu of flowers the family suggests a donation to the Alzheimer's Association in care of the Ferry Funeral Home, 301 S. Washington, Nevada.