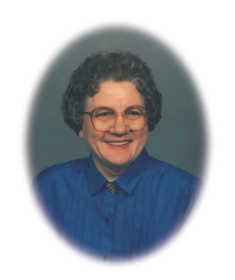 Anna Geneva Parrish, 87, of Montevallo, Mo., passed away Sunday, May 1, 2016, at Cedar County Memorial Hospital after a short illness.

She was born Oct. 5, 1928, to Arthur and Eunice Egbert in Gorin, Mo. She attended and graduated from Gorin School in 1947. Anna was a member of Gorin Methodist Church since her childhood.

After graduation she worked at National Fidelity Life Insurance in Kansas City, Mo., where she met many life long friends, including her future sister-in-law, Madelene Parrish, who introduced her to her husband, Cap.

They married Nov. 18, 1961, in Kansas City, Mo. At that time Anna began her life-long career of being a homemaker and farm wife. She enjoyed raising chickens, working in the garden and attending to her flowers. After the tornado in 2006, Anna and Cap still remained on the farm in their new home.

On July 10, 1963, her son, Jeff, was born. The biggest joy of her life came on Sept. 9, 2002, when her grandson, Cameron Albert Parrish (Little Cap), was born. She enjoyed helping Cameron with all of his activities and getting his chickens ready for the fair.

Even after Cap's death, she enjoyed going with her son Jeff and grandson, Cameron, to toy tractor shows.

Anna was a very loving and caring person. She enjoyed special occasions at Chicken Annies which was her favorite place to eat. She was looking forward to going there on Mother's Day.

She is preceded in death by her husband, Cap Parrish; her parents, Arthur and Eunice Egbert; one son, Larry; one brother, Arthur Parrish; nephews, Kevin Parrish and Gray Calvin; and her in-laws, Grace and Albert Parrish.

Funeral services will be held at 10:30 a.m., Thursday, May 5, at Sheldon Funeral Home, El Dorado Springs, Mo., officiated by the Revs. Brent Bland and Jack Daniel. Music selections will include, "Sweet By and By," and "Worship Medley," with Lou Ferguson as the soloist. Casketbearers will be Tim Mark, Bill Yarbery, Dave Ferguson, Hank Leonard, Adam Dold, and Mark White. Interment will be in Virgil City Cemetery, Virgil City, Mo.