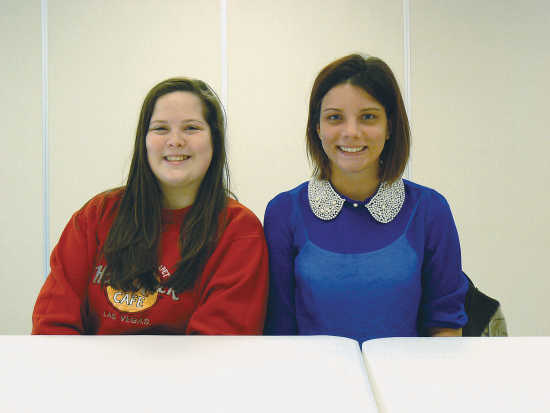 Nevada high school junior, Hannah Bond, left, and senior, Emily Dunlap were recognized at the May meeting of the Vernon County Youth Task Force for their service to school, community and on the task force. Johannes Brann/Daily Mail

"I want to thank Emily Dunlap and Hannah Bond," said psychologist and Vernon County Youth Task Force chair, Trisha Bridgewater, "for all they've done at school and on this group."

Completing her junior year, Bond is a cheerleader, plays the trombone in band, participates in show choir, has been an active member of the Youth Enrichment Services committee at Nevada high school and served on VCYTF.

In its third year, the Golden Lion award recognizes area students who give of their time, talent and efforts to better their community.

"I was honored just to have been nominated, let alone to be one of the handful of award recipients," said Dunlap. "I enjoyed my high school years but I'm looking forward to starting my online courses through Western Governors University. I should have my bachelors degree in 12 to 18 months."

"This month is a double graduation for Emily," noted Bridgewater.

While she received her high school diploma on May 22, thanks to successfully completing many dual credit courses, Emily received an associate of arts degree from Crowder College on May 15.

"Emily," said Bridgewater, "you epitomize the strong, active, caring and smart students we want to see across our county."

"We've done a number of worthwhile projects," said Bridgewater as she began the year-end review. "But I think the anti-bullying conference was one of the most important."

"I heard from students and I know it had a positive impact," said Tom Greeding, Nevada R-5 high school counselor. "The speakers really connected with the students by illustrating their points with situations to which the students could relate."

Next up was the Speak Hard conference in April. Four staff, 20 Nevada high school students plus three from the middle school attended the daylong session in Jefferson City.

"What made it so powerful was it had students telling students about the dangers of substance abuse and what programs are working in their schools," said Dunlap. "Our group wants to start Project Purple, a program to help those struggling with addiction to get the help they need in quiet and safe ways."

Bridgewater then led a review of "I Choose Kindness Week" at Nevada High School. This culminated with the awarding of a plaque to Fellow of Christian Athletes as the school group that best exemplified kindness.

After the meeting, Greeding said, "Just to show how seriously this award is taken, the committee received about 100 nominations for 19 different school clubs and organizations."

"I was at the May 16 powder puff football game," said Jennifer Gundy, Executive Director of On My Own. "While attendance was way down, the sophomores put on an awesome performance, beating out the freshmen and seniors."

"To mark October as national disability month, On My Own is hosting Amberley Snyder," said Gundy.

Snyder began riding at age 3 and competing and winning at rodeo at age 7. In January 2010, Snyder was driving to a competition in Colorado when she was involved in a rollover car accident. Paralyzed from the waist down, everyone thought her rodeo days were over.

"But a year and a half later," said Gundy, "she was strong enough to resume barrel racing and breakaway roping by using a seatbelt, Velcro and another strap to hold her in place. On Sunday, Oct. 2, we're having her speak and give an exhibition at a five division open barrel race that's a fundraiser for On My Own and then she'll speak on Monday at the Nevada High School."

"Our next meeting," concluded Bridgewater "is set for 9 a.m., on Wednesday, Aug. 24, at the community center. We want more of the public to come so that we can strengthen the youth of our county."