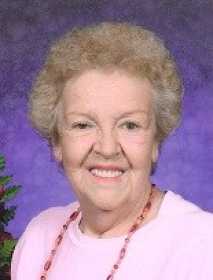 Marjorie was raised in Iowa and graduated from Green Mountain High School in 1952. Following graduation she moved to California where she resided for ten years before coming to Sheldon in 1967 where she lived the remainder of her life in the Sheldon area. Marjorie was employed by Hughes Aircraft for a number of years while in California and Kellwood Tent Factory in Nevada. She then worked at Fram Corporation for an additional 15 years until her retirement. Marjorie enjoyed crocheting, playing Bingo at the Elks, working crossword and jigsaw puzzles, and watching old westerns on TV.

Funeral services will be held at 10 a.m., Friday, June 17, at Ferry Funeral Home, in Nevada. Interment will follow in Tolson Cemetery, Sheldon, Mo. The family will receive friends from 5 to 7 p.m., Thursday, at the funeral home.

Contributions may be made in her memory to the Sheldon Methodist Church in care of Ferry Funeral Home.