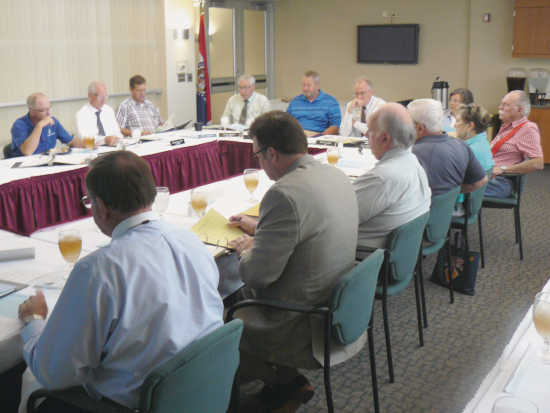 Nevada Regional Medical Center's board of directors has been busy. In the past week, the entire board met last Friday and on Tuesday while the board's finance committee met on Monday.

Last Friday's five hour meeting served as a strategic review of this past fiscal year along with some positive and lively discussion about the future. But some of the words exchanged at Monday's finance committee meeting were at times more pointed.

"The report on July showed a $440,000 loss plus there was the large payment on the backlog of capital expenditure for a one month drop in cash on hand of $2,544,000," said Larry Bledsoe, chair of the finance committee.

"The amount of cash on hand is getting to a serious stage," said finance committee member Bill Denman.

"Business is down 15 percent," said Bledsoe. "We are worse off than we were a year ago, significantly worse off."

"I know the old saying, 'Stronger sales will take care of all ills," Denman said. "But we've got to take action."

"We're burning through our cash pretty fast plus the report on July says collections were low," said Brad Copeland. "That's not a good combination."

"As you know, our funding comes from a variety of services," Leeper said. "Since January, we've had problems with doctor coverage for the behavioral health unit, having a hospitalist, we need another surgeon plus we've had problems with our 340B pharmacy discount program and a drop in obstetrics, emergency room visits and acute care patients. The only thing that's really grown and remained consistently high is the number of outpatient visits but we earn only a fraction for each of them as compared to a single acute care hospital inpatient."

"I understand there are reasons for the financial fix we're in but what are we doing to change this?" asked Bledsoe.

"Those of us here, as well as everyone on the board, have heard you tell us about those problems for months but they're still not fixed," said Denman.

"We now have pretty good coverage in the BHU, we have hospitalist coverage, by October, the 340B pharmacy program should be restored, the New Vision drug treatment program will begin in later September and we are actively recruiting doctors for a number of areas," replied Leeper. "I can assure you that August will not look anything like July but we'll be in a transition period for a little while yet.

Commenting outside of the meetings, Steve Russ, board president and pastor of First Baptist Church said, "Besides the regular monthly meetings of the board and its finance committee, the entire board gathered Friday for a five hour special session. While monthly board meetings lasting three hours or more are not unusual, it's important to look beyond the month-to-month measures and set aside time to look at the bigger picture."

Various presenters covered such things as a review of the hospital's performance over the past fiscal year in five areas, a revealing look at where the people of Vernon County go for inpatient hospital services and what turned out to be a lively discussion about future directions for healthcare and possible directions for NRMC.

"I found it interesting that over the course of our five-hour strategic review meeting, we never zeroed in specifically on finance as a topic," said Kevin Leeper, NRMC Chief Executive Officer. "We spent some time reviewing the past fiscal year but far more discussing the future of healthcare and of NRMC."

The five measures of how NRMC did in fiscal year 2016 included people, service, quality, growth and finance. It has already been publicized that the first half of that fiscal year was quite good while the second half was horrid, leaving a net loss for the year of $2.37 million. But how did the hospital measure up in other ways?

Leeper then presented the board with data showing where Vernon County patients have gone for their healthcare from 2012 into 2016. Although NRMC is the sole hospital in the county, only 43.9 percent of the population that was hospitalized for inpatient services in 2012 chose NRMC. In 2016, that market share was down to 40.2 percent. Meanwhile, Freeman Health Systems of Joplin went from a 14.8 percent share in 2012 to 18.7 percent of Vernon County patients in 2016.

Bill Donatelli, senior vice-president of operations for Quorum Health Resources led a lengthy discussion on making the hospital more sustainable and the possibilities of aligning NRMC with a neighboring hospital system in order to receive some of their patients in areas where another hospital or group is weak.

Opportunities include deriving more income by better tracking the revenue cycle and devising a plan to overcome negative perceptions in order to increase local use and physician support. Included among the identified threats were increasing competition from Joplin and Kansas City, especially in specialty areas, difficulty in recruiting and retaining physicians as well as a reliance on governmental supplemental payments which change or could go away.

In evaluating alternatives, Donatelli's analysis on behalf of Quorum Health Resources stated the "status quo is not a viable alternative." Instead, "NRMC should address and restructure it operating costs and revenue cycle functions" as well as recruit and retain a mix of physicians to meet general and specialty needs.

By far, the most ominous comment in Donatelli's written presentation was this statement: "NRMC will, in all likelihood, benefit from execution by and collaboration with an independent third-party with the resources to provide forced amplification to execute on this operational initiative."

Not only does it seem to Quorum Resources that NRMC would benefit from an affiliation with another hospital or group in order to provide further resources -- an "amplification" -- but such a relationship may well be necessary in order to "force" NRMC to carry out the "operational turnaround" which Quorum believes must be provided.

Six special approval items were unanimously authorized by the finance committee and the board of directors.