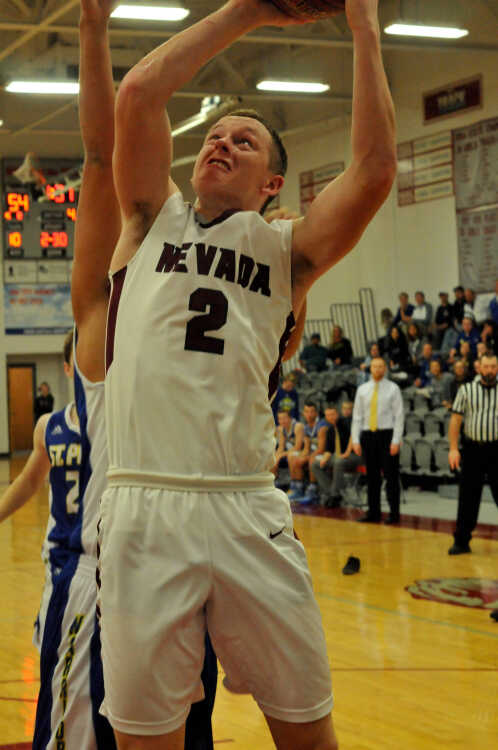 It wasn't pretty, but the Nevada Tigers found a way to get it done.

Coming off its thrilling season-opening victory last week over St. Pius X, the top-seeded Tigers looked flat against No. 8 seed McDonald County, as they pulled out a 44-40 victory Monday evening at the 70th Annual Carthage Basketball Invitational.

The Tigers (2-0 overall, 1-0 WCC) trailed briefly, as they fell behind 9-4 in the early-going. From there, Nevada went on a 12-0 blitz to grab a 16-9 lead, as they never again trailed. Nevada led 29-17 at halftime, as junior guard Braeden Hinton sent the Tigers into the locker room with a buzzer-beating 3-pointer.

The second half was a different story, with McDonald County outscoring the Tigers 23-15.

During his postgame radio interview, NHS head coach Shaun Gray said McDonald County was playing with a sense of urgency in the second half.

"Coming out of halftime, I think they thought, 'hey, we have a chance to pull off the upset,'" he said. "And they just came out and flat out played harder than we did. And that's very disappointing. That's something that is unacceptable in our program."

"Gray continued, "For another team to play harder than you, and to play like they want the game more than you do ---- it's something I'm disappointed in and I'm sure the boys are disappointed in as well."

The Tigers had a rough shooting night from the field as well as from the free throw line, knocking down just 7-of-18 attempts from the charity stripe.

"Free throws are controllable, and we're much better than that," Gray said.

"This is two games in a row that we've been beat on the glass," he said. "And you're not going to play the way you want to play when you get beat up on the boards. We also had some really lackadaisical turnovers that allow teams that you're better than to play with you."

In Friday's semifinal matchup, the Tigers are set to face the winner of tonight's contest pitting fourth-seeded Rogers (Ark.) against fifth-seeded Carthage.

Gray noted during his radio interview that the Tigers pride themselves on toughness.

"Toughness is a lot of things," he said. "It's guys getting on the floor first; it's being the more physical team ---- and we weren't any of those things tonight."

Gray continued, "I called the boys out on it. They've been told and they know. So it's going to be up to them to show some resolve in practice the next few days, and come out and show us that they're not going to get pushed around Friday."

On a positive note, Gray said he was pleased with the first half post-play of Ferry.

"(McDonald County) had some early foul trouble," Gray said, "with at least one of their bigs out of the game. Patrick took advantage of that and played well (in the paint)."

Tip off for Friday's game against the winner of Rogers vs. Carthage is set for 6 p.m.

In Monday night junior varsity action, the Tigers thumped Knob Noster 60-23 in the first round of the Harrisonville Tournament.

Talley added that Knob Noster struggled to handle the Tigers defensive pressure in the half court.

For the Tigers (1-1), sophomore Will Johnson finished with a game-high 15 points, while Dalton Gayman added 14 and Matt Thompson 11.

"We got lots of post touches and shot it well early in the game," Talley noted.

The JV Tigers return to the hardwood tonight when they square off against Columbia-Hickman at 6:45 p.m.

The Lady Tigers junior varsity team (1-1) was also in action Monday night at the Harrisonville Tournament, as they defeated Lutheran 39-23. For Nevada, Lani Coonrod poured in aa game-high 15 points.