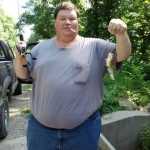 Jason Miles (Neil) Sturm, age 44, passed away suddenly at his home in Lamar, on Dec. 24. He was born Dec. 9, 1972, in Nevada, to the late Debra Neil, and Olin Wyland of Mulberry, Kan. He was united in marriage on Oct. 3, 2013, to Kimberly Claunts, she survives at the home. To that union, one son, Jase Elijah Sturm was born and passed away Aug. 9, 2014. He has two sons from two previous marriages, Jay Davis Sturm, Las Vegas, Nevada, and Jared Jason Sturm, Branson.

Jason grew up in Mulberry, Kan., later moving to Nevada, where he attended school, and worked at Guthrie Motors, Loyd Trucking and Tong Farms. Jason enjoyed working on cars, fishing, hunting, the outdoors, and spending time with friends and family. Jason also took great pride in watching youth sports, riding four-wheelers, and enjoying the outdoors with his family.

A celebration of life will be held Saturday, Jan. 7, 2017, at the Moundville Community Building in Moundville, from 2 - 4 p.m.