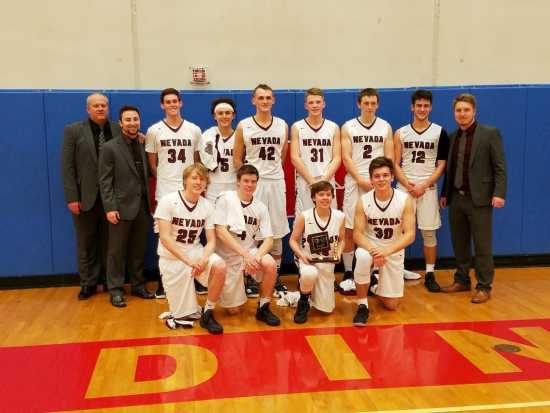 "This team continues to take big steps forward," Nevada head coach Shaun Gray said. "The guys have realized that they can be really, really good if they keep pushing themselves to get better. If not for turnovers and (Clinton) second-chance points we could have been even better tonight, and we still played a really good game."

Gray continued, "This team has an even higher ceiling than where they're at right now. And that's extremely exciting."

Entering the contest second-seeded Clinton knew it would have its hands full with Gayman as the 6-foot-5 junior forward dropped 31 points on the Cardinals when they met Dec. 6 in Nevada.

Clinton was able to hold serve early as the contest was tied 13-13 after one quarter of play. The Cardinals, however, were skating on thin ice early as leading scorer Trey Miller was on the bench saddled with two fouls.

"We came out pretty slow," Gray said. "We aren't getting out to shooters early in games like we need to be doing. And we're giving up too many open looks early in games." 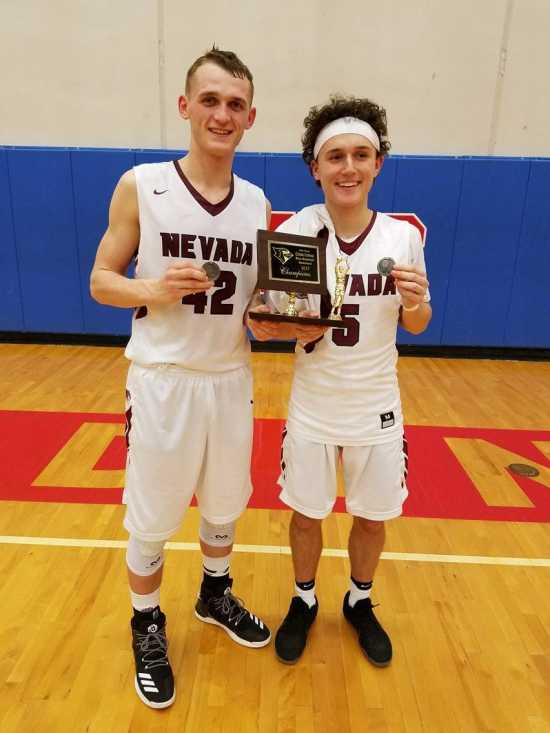 Nevada pulled ahead early in the second quarter courtesy of a Matthew Sommer 3-pointer, putting the Tigers up 16-13. After a 4-1 Clinton run evened the score at 17, Gayman responded with a bucket off the right block to put the Tigers back in front.

Late in the half a Sommer entry pass found Patrick Ferry who finished with the lay-in as the Tigers led 25-19, eventually settling for a 26-21 halftime lead.

Gayman led all scorers in the first half with 14 points, while Miller's seven points was tops for Clinton. Miller, however, picked up his third foul with eight seconds remaining in the half.

"Miller picking up his third foul when he did was big for us," Gray said, "because he had to quit being aggressive on the defensive end."

The third quarter opened with Gayman sinking a mid-range jumper as Nevada led 28-21. Clinton's Gunner Clark then cut the lead back to five with a low-post score. Nevada responded with an 11-0 blitz as Gayman capped the run by rattling off points on a thunderous jam, followed by back-to-back fast break lay-ins as Nevada increased its lead to 39-23 with 1:01 remaining in the third.

A 5-0 Clinton spurt trimmed its deficit to 39-28. With five seconds remaining in the third Gayman looked to throw-down another monster dunk but had the ball knocked out of his hands. Gayman quickly recovered, went up for the score and was fouled. With the free throw Nevada led 42-28 after three quarters of play.

After opening the third on 13-2 run Gray said it was perhaps one of the best quarters his squad has play this season.

"We defended really well in the third quarter and that got us going the other way," he said. "Those defensive stops got us a bunch of good looks at the other end."

Early in the fourth Gayman continued to sizzle, connecting from long-range as the Tigers led 45-30. The rout was on as Myles McNeley's second trey of the night handed Nevada an 18-point advantage. A Gayman offensive rebound and put-back upped the Tigers lead to 58-35 midway through the frame as Nevada outscored Clinton 24-17 in the fourth.

"We went into halftime and made a lot of adjustments," Gray noted. "I was very proud of the boys for executing those adjustments in the second half. We looked like a veteran ball club. We're seeing teams for a second time and playing well, and we've also been coming out strong in the second half. That's a good sign going forward."

Gayman's career-high masterpiece included 15-of-18 shooting from the field, 6-of-8 from the charity stripe and 2-of-3 from 3-point land.

In addition, Gayman chipped in 10 rebounds, four blocks and four steals. Sommer also finished with a double-double (11 points and 10 assists).

"It was another dominant performance for Clay," Gray said. "Clinton did a good job of not allowing Clay to catch the ball on the block. He probably scored more times off the dribble tonight from the perimeter than he ever has. They had (center) Gunner Clark guarding Clay, but he wasn't quick enough to stay in front of from. Clay showed us his complete offensive game today."

Gray said he was pleased with Nevada's overall team performance.

"Myles McNeley shot it well," Gray said. "He made two three's in the second half and that was big for us. We need our guards to knock down shots.

"Matthew was really good in the pick-and-roll, hitting a couple mid-range jumpers and also getting to the free throw line. Plus, he passed the ball extremely well."

Gray continued, "We were better from the line tonight. Having guys step up and make free throws was big for us."

Gayman and Sommer were named to the 92nd annual Clinton Basketball All-Tournament team.

After a lengthy layoff from conference play the Tigers return to the hardwood Tuesday for a West Central Conference road-matchup with none other than the Clinton Cardinals. Nevada will be looking for its third victory over Clinton as the game is set to tip off at approximately 7 p.m.