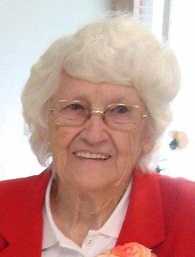 Lily “Marie” Phillips, 96, rural El Dorado Springs, passed from this life on Thursday, April 13, at the Cedar County Memorial Hospital in El Dorado Springs. Marie was born October 22, 1920, in Sugar City, Colo., to Edgar Patrick and Minnie Louise (Phillips) Moore. On Feb. 12, 1938, she was united in marriage to Charles M. Phillips and he preceded her in death in November 1997.

Marie was raised near Fort Scott and also Rich Hill. Following her marriage she lived most of her life in Nevada. Marie worked for Key Work Clothes and Nelly Don in Nevada for a number of years. She also lived and worked for a time in Belton for the Grace Company. In the early 80s she moved to Pensacola, Fla., where she owned and operated her own sewing shop for nearly 20 years. In 2000 she moved back to Neodesha, Kan., and in 2012 to El Dorado Springs, where she has continued to reside. Marie was a member of the Seventh Day Adventist Church in Nevada.