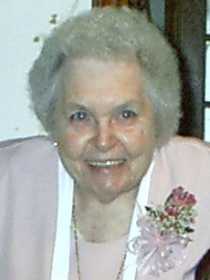 Dora, the oldest of seven children, came with her family to Moundville at a young age. She helped with the care and raising of all of her siblings while growing up. Dora attended school in Bronaugh and Nevada graduating from Bronaugh High School Class of 1942. She lived all of her adult life in Vernon County. She attended Riverside Cowboy Church in Nevada. And was a 50-year member of Ellis Domestic Science Club. Dora enjoyed crocheting and especially loved cooking and caring for her family.

Funeral services will be held at 10 a.m. on Saturday, June 17, at Ferry Funeral Home in Nevada. Interment will follow in Welborn Cemetery in Moundville. The family will receive friends from 5-7 p.m. on Friday evening at the funeral home.

Memorials are suggested to Hospice Compassus or Welborn Cemetery in care of Ferry Funeral Home, Nevada.