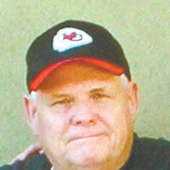 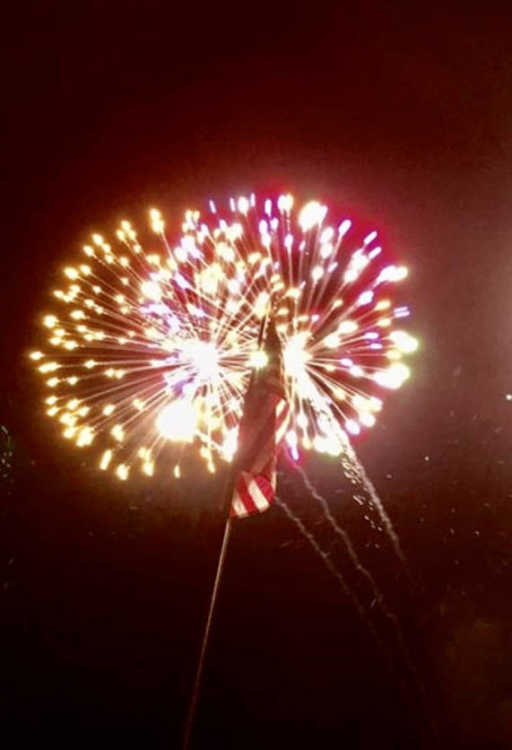 Some of the Scott Garber's fireworks display.
Richard Carpenter/Special to the Daily Mail

I recently traveled to Miami, Oklahoma, to attend my friend’s annual 4th of July party. This yearly gathering to celebrate our country’s birth has become a must see for many of my friends and myself.

I met Scott and his wife Kellie over a decade ago while attending a Chief’s football game at Arrowhead Stadium. A dear friend of myself and my longtime Chief’s game companion Rusty Reed was a man named Dick Schulte. Dick for many years owned the famous Blues Night Club in Westport, known as Blayney’s (sadly we lost Dick to cancer not long ago).

Several friends of Dick’s had formed a tailgate group that gathered in parking lot D every Sunday morning when there was a Chief’s home game. This first meeting with Scott and Kellie was back in the time when the Chiefs were in a word “terrible.” They had won few games that season and this particular December Sunday was as bleak as the Chief’s prospects.

Despite the dismal performance of our team, I discovered immediately that these two Okies were just as dedicated and die hard Chiefs fans, as were Rusty, Dick and myself. Despite the condition of our beloved Chiefs none of us have ever wavered in our loyalty.

In the succeeding years we have added many new members to our tailgate gathering and we now regularly host upwards of 30 plus guests each game weekend. In fact this has become what we refer to as our Chief’s Family.

Rusty and I learned something about Scott a few years ago. He was enamored with fireworks and was actually licensed to purchase and put on large pyrotechnic shows. He has been hired to do several shows for towns and businesses but it is his annual fireworks display at their ranch home outside of Miami that he dearly loves.

He has shows scheduled on and near the Fourth of July so he selects a Saturday in advance of those dates to host his own party. Last Saturday was the latest of these yearly events.

Both Scott and Kellie spend many days and weeks preparing for this annual party. I am not sure how many people actually attend each year but it is definitely in the hundreds. As Rusty said to me last weekend, “I wonder if there is anyone left in the town of Miami tonight?”

During the afternoon dozens of kids and a few adults went swimming in the Garber family pool. A large smoker was set up to barbecue hot dogs (this year they cooked about a thousand). A shaved ice truck provided cold deserts for the kids and bags of kettle corn were passed around as well. I especially loved seeing so many acquaintances that I only see at this party as we gathered in our lawn chairs under the shade trees.

This year Scott and Kellie added something new to their party. In the past once it got dark Scott would begin his display in the pasture just to the south of his home. This year, a couple of activities preceded his fireworks.

A group of very young children had rehearsed the Pledge of Allegiance. They stood with hands over their hearts before the loud speaker and asked all the guests to stand and recite the pledge with them. This was followed by a young lady singing the national anthem.

I freely admit that as these young kids were reciting the pledge I got a catch in my throat. Regardless of the thousands of times I have heard the pledge or the anthem it never fails to elicit an emotional response for me.

There is something about these words and music that only Americans can truly understand or feel. Our national birthday each year provides all of us with an American sense of unity and pride.

As I watched the faces of those children as they spoke the words of our pledge I was impressed with some thoughts about our future. So many people complain regularly that we are in trouble as a nation and that the kids today are different. Well I guess each generation is different but seeing these kids perform gave me a lot of hope for the future.

Scott’s display lasts about 30-45 minutes. It compares favorably to many of the annual displays I have seen in other towns. Pyrotechnics is something that Americans have always associated with the birth of our nation. The explosions that flare and bang across our skies each year around the Fourth are manifestations of our love of the liberty we are blessed to enjoy. A liberty that was won at great cost and that has been repaid countless times in the past 241 years.

That pure pleasures of knowing what freedom and liberty represent is why I remain so optimistic about the future of our country. Many people look at succeeding generations and feel that they are losing the ideas of what America means. My own generation back in the 60s was once thought to be out of touch with the mainstream. In the end, that is what liberty really means. I like to think it is similar to one of Clint Eastwood’s Spaghetti Westerns from the 60s titled, “The Good the Bad and the Ugly!”

Americans come in all shapes, sizes, colors, religions and a host of other types. There are countless varieties of behaviors, some even a bit outrageous. About the only thing we ask of any American is respect and love for our freedoms and to joyously celebrate its rewards.

As you get ready for your own Fourth of July observances over the next few days, take time to remember the tremendous costs that have been paid for our freedom but do it in a joyous and loud manner. The Fourth of July is meant to be rowdy and filled with fireworks. Thanks Scott and Kellie for all that you have done for our tailgate group and for your community of Miami.