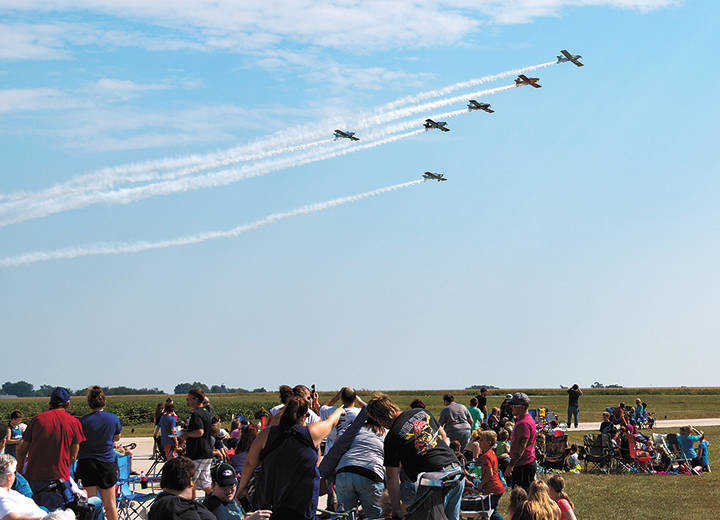 For the first time in more than two decades, the roar of airplanes woke Nevada up for an airshow Saturday morning.

“It was huge,” Sharon Kegler said.

The airshow opened with John Hall from Sky Dive Kansas City parachuting into the airport carrying a large US flag while the National Anthem played.

The city had predicted more than 2,000 people would attend but estimates from Saturday indicated a crowd closer to 5,000.

Kegler explained shuttle drivers told her they carried people back and forth to the parking lots that were from outside Vernon County.

“They were all excited,” Kegler said. “They had a great time.”

She said the High Mobility Multipurpose Wheeled Vehicle — commonly known as a Humvee — brought out by the Missouri National Guard was a big hit with children who got to crawl inside of it.

“I had a great time at the show,” pilot Bob Richards said. “The crowd was awesome. I did my best to make an impression and give us momentum for next year’s show.”

Richards and his yellow Pitts S1-SS put on an impressive aerobatic display for the crowd. He was joined by Tanner Rindels and his Extra 400. In addition to air shows, Rindels also flies A-10s for the U.S. Air Force.

John Hall and Rusty Sullivan from Sky Dive Kansas City parachuted into the airport Saturday morning signaling the start of the airshow. Hall’s son, Chris Hall, was flying the Cessna 182 he and Sullivan parachuted from.

Also on hand Saturday was the KC Flight Formation Team flying six single-engine airplanes from Van’s RV experimental aircraft line. The team crisscrossed the sky above the airport in different formations such as the rocket, and performing a “bomb burst” and drawing a heart in the sky with the aircraft’s smoke system.

In addition to the entertainment in the air, plenty was to be seen on the ground.

A number of aircraft were on display including MedFlight’s helicopter, Bill Koon’s Cessna 172 and Dusty Elkinton’s Ag Tractor aerial sprayer.

Kegler said there were supposed to be more aircraft on display but they were unable to make it Saturday. There was however, a Robinson helicopter selling rides around Nevada. For much of the morning, there was a line of people waiting for helicopter rides.

The airshow’s larger than expected crowds caused a few problems for the organizers — they needed more volunteers and vendors ran out of food.

Kegler said there were no problems that had to be taken care of by law enforcement. Nevada Fire Department and Vernon County Ambulance were also on hand. She said the warmth Saturday did cause several guests to become overheated though the steady wind helped keep most people cool.

Kegler will attend a conference Thursday to discuss the final costs of the 2017 air show and a 2018 air show.

She said she doesn’t want the city to have to charge an entrance fee though a parking fee could help offset costs.

The goal she explained, is we want to provide inexpensive entertainment to the community.

Looking forward to 2018, Kegler would like to see more aircraft on display on the ground, more military aircraft, and more aerial flying acts.

“We’re just excited it was a success,” she said.