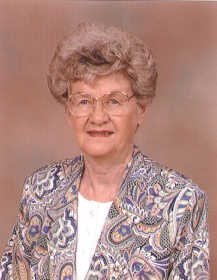 At age 6, Mary was a mascot of the Cherryvale American Legion girls’ drum and bugle corps, which helped fuel her interest in music. In high school band she played the drums and after graduating from Chanute High School was the drummer in an all-girls band featured at events, weddings and other functions in the area. Her love of music was lifelong.

Mary endured loss at an early age and learned by her mother’s example how grit and determination are the tools she must use to survive whatever hardship life throws at her. In 1931, Mary’s and her brother Glenn’s father died. Five months later they lost their maternal grandfather, Dr. Sam Kellam, Cherryvale’s beloved town doctor and president of a nearby meat-packing business, who was robbed and murdered while delivering payroll to his employees. His tragic murder was never solved.

Ernie and Mary moved to Nevada in 1958 to operate their new business, Madill Tire & Supply, located on the Square. While Ernie ran the store, Mary began a career at Farm & Home Savings and Loan Association and retired from there as executive secretary to the vice president after 25 years. She was an active participant in the community through clubs and organizations, and a long-time member of Business and Professional Women. Her involvement with the local Lares Club, a women’s social organization that held fundraisers to benefit different needs in Nevada gave her cherished, lifelong friends.

She and Ernie spent much of their free time golfing and traveling and shared that love for music and dancing. They were well known to part many a dance floor as they spun to their favorite big band sounds from their heyday and beyond.

Funeral services will be held at 1:30 p.m. on Thursday, Dec. 28, at Ferry Funeral Home, Nevada. Interment will follow in Newton Burial Park, Nevada. Friends may call now and until the hour of service and the family will receive friends from 12:30 to 1:30 p.m. on Thursday prior to the service at the funeral home.

Memorials may be made to the American Cancer Society in care of Ferry Funeral Home.