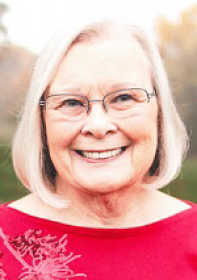 Merle Ann Norcross, 75, of Nevada, passed away on Sunday, Dec. 31, 2017, at her home in Nevada. Merle Ann was born Feb. 9, 1942, in Algona, Iowa, the daughter of Raymond and Dorothy Schulz Harig. She attended a country school in Iowa for 2.5 years, St. Benedict parochial school through the eighth grade, and LuVerne Hugh School for grades 9-12. She also attended Iowa State University in 1960 and ‘61 where she was a member of Kappa Delta Sorority.

Merle Ann married Gary Norcross on Dec. 5, 1961, in Whitehall, Mich. She and Gary moved to Nevada from northern Iowa in 1972. While living in Nevada she worked at Mary’s Fabrics and Bank of America. She lists serving as a tour guide for the bank as one of the highlights of her life. Many lasting friendships were acquired during her 20 plus years at there. She loved to travel noting that she visited 50 states, 13 countries and went on nine cruises. One of her favorite pastimes was sewing, she learned to sew at age 8. Later in life she pieced together many quilts enjoying the artistic challenge it presented. Merle said having all the members of her family gather at the Norcross home was the number one highlight of her life. Having a wonderful meal and a game of cards was a must. You learned to play cards very early if you were a Norcross.

During her life in Nevada she was a member of Beta Sigma Phi Sorority, St. Mary’s Altar Society and a “Pink Lady” at NRMC. Merle Ann was voted salesperson of the month by the Nevada Rotary Club in 1981. She also was a member of the Nevada BPW where she held numerous offices.

Merle Ann is survived by her husband Gary, of the home. Also surviving are two sons, Jody Norcross and wife Bridget, of Nevada, David Norcross and wife Sandra, of Nevada; and a daughter, Kristin Norcross of Arlington, Va. Grandchildren include Justin Norcross and wife Hilary, of Kansas City, DaLacey Garfield and husband Ben, of Lamar, Tiffany Miller and husband Trey, of Fargo, N.D., Taylor Kimbrough and husband Ryan, of Lincoln, Neb., and Abigail Norcross, of Nevada. She has seven great-grandchildren Addalie, Averie, Lucus, Leighton, Lailee, Natalie and Ledger. Also surviving is a sister, Mary Macleod and husband Jim, of Lee’s Summit, Mo. Preceding her in death were her parents; a brother Julius Harig, of Rockwell, Iowa; and one granddaughter.

Funeral services will be held at 10 a.m. on Saturday, Jan. 6, at St. Mary’s Catholic Church in Nevada with Father Peter Savidge officiating. The family will receive friends from 6-7 p.m. on Friday at Ferry Funeral Home.

In lieu of flowers, a donation may be made to the American Cancer Society or St. Mary’s Altar Society in care of Ferry Funeral Home.