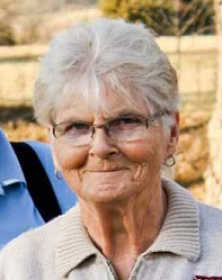 Lucy Mae Garrett, 75, Nevada, passed away on Sunday, Jan. 21, at her home in Nevada following a lengthy illness. Lucy was born April 1, 1942, in Deerfield to Aldric Ellis and Virginia Aldeline (Harding) Pettibon. On April 6, 1968, she married Leonard Garrett in Miami, Okla., and he preceded her in death on Dec. 13, 2007.

Lucy grew up in the Deerfield area and attended Deerfield Schools through the 10th grade. She worked at the Nevada State Hospital for a number of years. Lucy and Leonard owned and operated Family Affair Classic and Used Car business in Nevada for several years. Her memberships included the Red Hat Society in Clinton, Mo., and the Nevada Eagles Lodge.

Funeral services will be held at 2 p.m. on Wednesday, Jan. 24, at Ferry Funeral Home in Nevada with Pastor Terry Mosher officiating. Interment will follow in Olive Branch Cemetery, Milo. The family will receive friends from 6-8 p.m. today at the funeral home.

Memorials are suggested in her memory to Olive Branch Cemetery in care of Ferry Funeral Home.