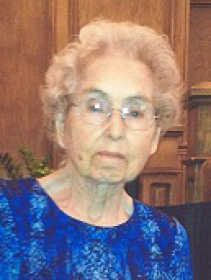 Betty Lou Shirley, 92, Kansas City, Mo., passed away on Monday, Feb. 5, at Garden Valley Manor in Kansas City, Mo. Betty was born Nov. 13, 1925, in McCook, Neb., to Fred and Mabel Roggensees. On March 26, 1949, she was united in marriage to Raymond E. Shirley who preceded her in death on June 6, 2011. Betty moved to Missouri with her family when she was 10 years old. Graduating valedictorian from Walker High School in 1943, she then attended nursing school at General Hospital in Kansas City, Mo., receiving her RN diploma, and years later going back to school for her BSN at Pittsburg State. After years of nursing, which included director of nursing at Nevada City Hospital, Betty became the first director of the LPN program in Nevada, where she worked until her retirement in 1986. Some of the many awards she received included 1981 Nurse of the Year Candidate for the 13th District Nurses Association and 1982 Vernon County Chamber of Commerce Pacesetter Award for Outstanding Educator. Following her retirement, she enjoyed traveling, camping with her family, spending time with her grandchildren, and volunteering at Moss House, the Election Board, Red Cross Blood Mobile, and others.

Betty is survived by three children, son Kenneth and his wife Jeannette, from Mountain Home, Ark., daughter Carol, from Gladstone, Mo., and daughter Joyce and her partner Kim Allen, from Snook, Texas; six grandsons; one step-grandson; and one step-granddaughter. In addition to her husband Raymond, she was preceded in death by her parents; her brother, Doug Roggensees; her sister, Ruth Fattig; her son-in-law, Doug Bilquist; and a son Ronald Wayne.

The family will receive friends from 6-8 p.m. Tuesday, Feb. 13, at Ferry Funeral Home in Nevada. A graveside service will be held at 11 a.m. on Wednesday, Feb. 14, at Newton Burial Park in Nevada.

Those who wish may contribute in Betty’s memory to the Nevada R-5 Foundation Scholarship Fund for LPN Students in care of Ferry Funeral Home.