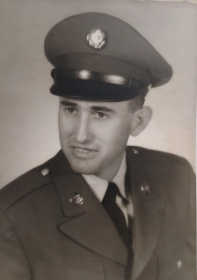 Charles grew up in Rich Hill and attended Rich Hill School until 8th grade when his family moved to California for his father’s health. He graduated from Pomona High School in Pomona, Calif., in 1956. In 1960, his family moved back to Missouri, settling in Butler where he met the love of his life, Myrtle Cook. After six weeks, they were married on Jan. 14, 1961. They have been blessed with 57 years of marriage.

“Chuck,” as he was known, and Myrtle never had children of their own, but helped raise Myrtle’s two nieces, Jennifer Cook and Patty Bannister. After Jennifer and Patty married, Chuck and Myrtle would be known as “Grandpa and Grandma” to their children.

Chuck spent 60 years in automotive parts. He was everything from delivery driver to store manager, but the job he liked best was as a salesman since he never met a stranger.

Graveside services were held on Monday, at 2 p.m., at Green Lawn Cemetery with Pastor Barrett Case officiating. Military rites were provided by American Legion Post No. 67.

The family suggests memorial contributions be made to St. Jude’s Children’s Hospital or Children’s Mercy Hospital in care of Heuser Funeral Home.