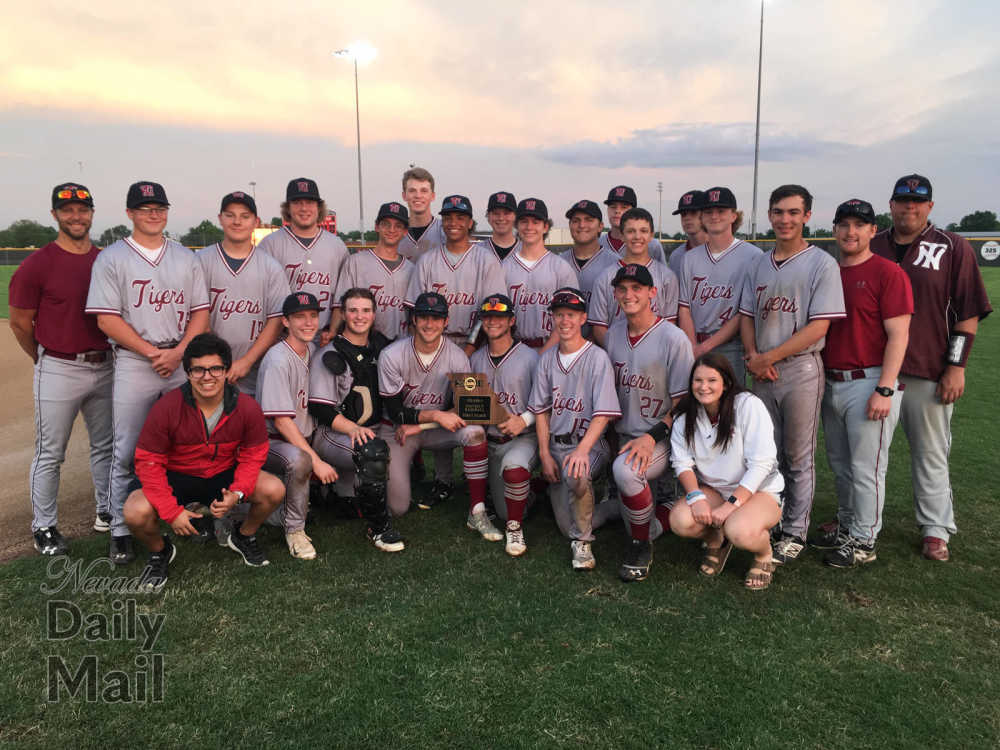 It was circa 2003, and Penn was the star player, as the No. 7 seed Tigers blitzed through the bracket.

After coming up just short several times since 2003, the No. 3 seed Tigers broke though Tuesday evening in Carl Junction, upending the top-seeded Monett Cubs 5-2 to secure the Class 4 District 12 crown.

“I remember how happy I was as a player when we won it 15 years ago,” Penn told the Daily Mail shortly after Tuesday’s victory. “Now, to see these guys win it, is an amazing feeling. Our goal has been to hang another banner in the gym, and we were able to get that done. That’s huge for us.”

The red-hot Tigers (15-8) entered Tuesday’s title clash on a five-game win streak, and had outscored their first two tournament opponents by a combined 18-2 margin. Meanwhile, Monett eked out a 1-0 victory in the semifinals over host Carl Junction on Monday, and in the process burned their ace pitcher, Corey Spain, who has committed to the University of Arkansas.

Nevada starting pitcher Branden Harder aided his own cause in the top of the first, as his RBI sacrifice fly handed the Tigers a 1-0 lead.

Harder encountered major trouble in the home half of the first, going to a full-count on three consecutive batters before issuing a bases loaded walk that knotted the contest 1-1. Harder, however, was able to minimize the damage. With the bases loaded and one out, he punched out Karter Brink, then induced Jake Bouchard to hit into an inning-ending groundout to third baseman Braeden Hinton. 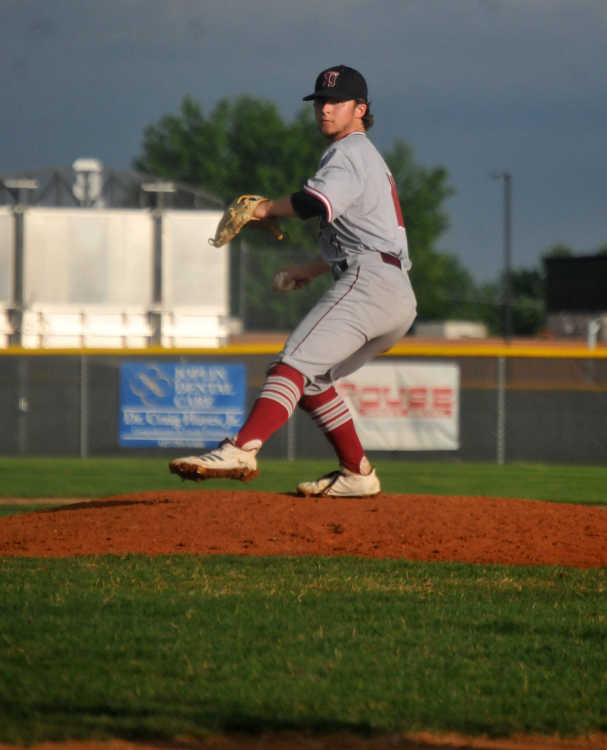 Harder struck out a pair in the second, but it wasn’t all rosy, as the senior hurler’s pitch count had been run up to 50 at the conclusion of two innings.

Nevada touched up Monett starter Brady Wright for a pair of runs in the third. The Tigers regained the lead on Hinton’s fielder’s choice groundout, scoring courtesy-runner Jayden Ast. They then went on top 3-1 after a two-out infield throwing error allowed Harder to score from third.

Monett struck back in the bottom of the third as Brink, who entered the contest with a team-leading .389 batting average with runners in scoring position, laced an RBI single to center. Brink’s two-out base knock trimmed Monett’s deficit to 3-2. With Brink in scoring position, Harder avoided further damage with an inning-ending strike out of Bouchard.

A turning point in the contest came in the bottom of the fourth, with the Tigers still holding a 3-2 advantage.

With the speedy Derrick Morrison on second and two outs, Wright rocketed a liner off Harder’s thigh. Hinton scooped up the deflection and unloaded an accurate, off-balance bullet to first baseman Peyton Denney, getting Wright by a half-step. Instead of runners on the corners Hinton’s highlight reel play brought the inning to a close, while helping to preserve Harder’s pitch count. 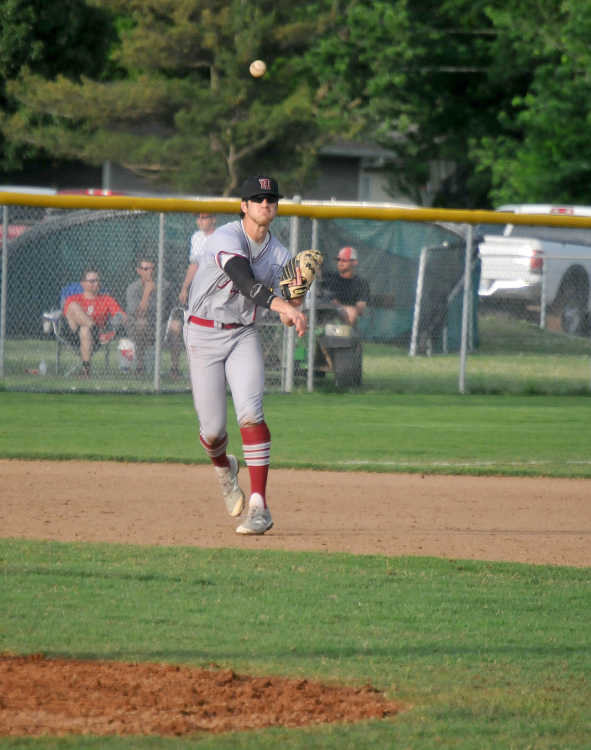 In the fifth Nevada knocked out Wright, while tacking on a pair of runs to go in front 5-2. Senior Trent Ellis fought back from an 0-2 count and pounded a two-out infield single, scoring Harder, who had reached on a leadoff single to left.

Nevada padded its cushion via Grant Miller’s bloop single into shallow left-center, scoring Dalton Gayman, as Nevada led 5-2. On the play Clay Gayman was thrown out on a close call at home plate.

Entering the bottom of the fifth with his pitch count at 79, Harder needed a quick inning, as his max pitch count under MSHSAA regulations was set at 105. Harder needed just six pitches to bring the inning to a close. Following the clean sixth inning Harder returned to the mound for the seventh, hoping to deliver Nevada the district crown. He recorded the first out on a fly out to center, then fanned Jedd Anderson, who slammed his bat into home plate after the whiff.

“After being at 50 pitches through two innings, we thought as a coaching staff we might get four or five out of him if we were lucky,” said Penn. “Those quick fifth and sixth innings were huge, and allowed us to send him back out there for the seventh. It’s just a compliment to Branden’s ability to find his command as the game was progressing.”

Added Penn, “Branden struggled early. But he made a decision in terms of his mentality, about the third inning, that he was going to make them beat him, and let his defense work behind him and make plays.” 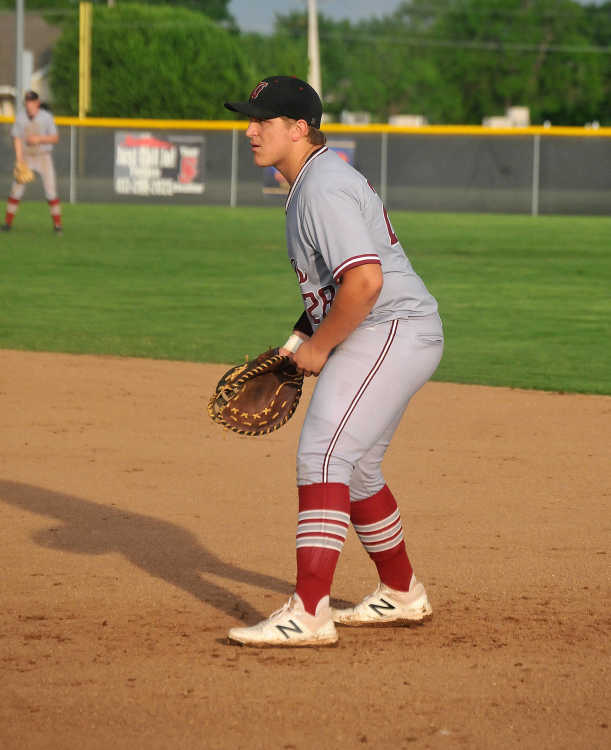 Harder, however, was unable to finish off Monett, yielding a two-out double to Wright. With Harder’s pitch count sitting at the magic number, 105, Penn brought in relief pitcher Logan Armstrong, who hit the first batter he faced, putting runners on first and second. Facing Razorback commit Spain, Armstrong induced a grounder to Denney. Denney quickly moved to his right and zipped the ball to a covering Armstrong, who was able to touch first before falling to the ground, narrowly beating Spain to the bag and sending the Tigers into jubilation.

Harder, who worked six and two-third innings, recorded eight strikeouts, while notching the victory. Armstrong recorded one out en route to the save.

“In terms of his stuff, I don’t think this was one of Branden’s better games,” said Penn. “To be perfectly honest, I thought he struggled with his command. But in terms of his competitiveness and his refusal to let them get the better of him, I’ve never seen him better. He was calm, he was under control on the mound, and was not letting his emotions get the best of him. I’m so proud of him, and that’s exactly what his team needed.” 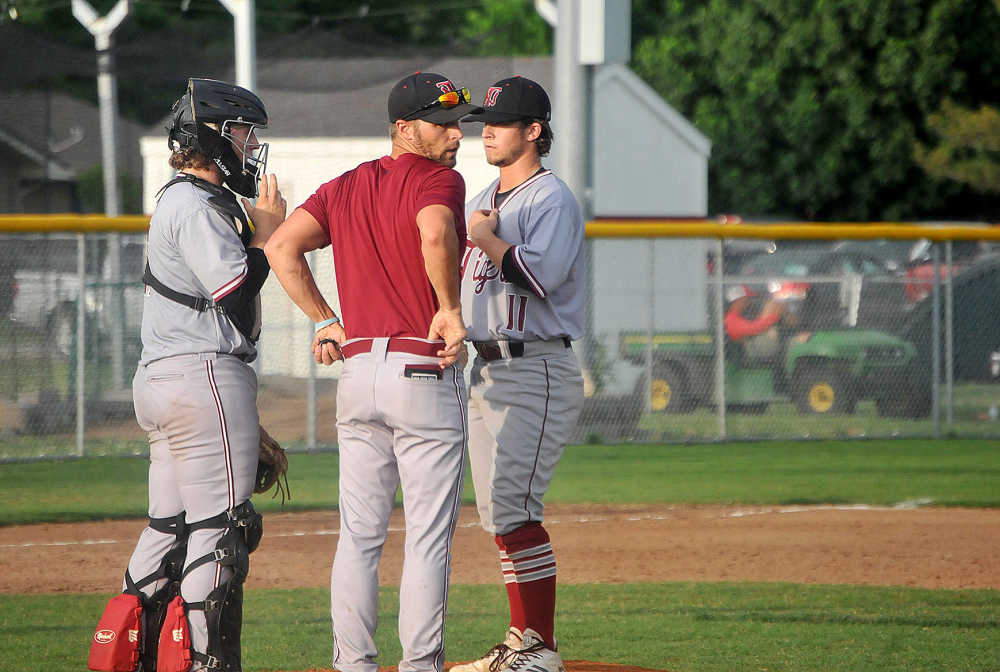 Said Harder, “I’ve thrown better. I couldn’t get a grip on the ball, and I struggled throughout the game. But I was dialed in, threw strikes and did what I needed to do to put the ball in play, and my defense did a good job.”

Harder said his strategy was to keep the ball down in the zone.

“They didn’t hit many fly balls, and I was able to keep the ball on the ground, and that was a big key. They’re aggressive at the plate, so I was trying to keep my fastball low in the zone.”

Harder said he couldn’t be more pleased with the outcome.

“Winning the district championship means everything to me,” said Harder, a future West Point Military Academy cadet. “That was our goal going in on the first day of preseason, was to be district champs. We did a great job, and I’m proud of everyone.”

Fellow senior standout Hinton, was also overjoyed with the victory. 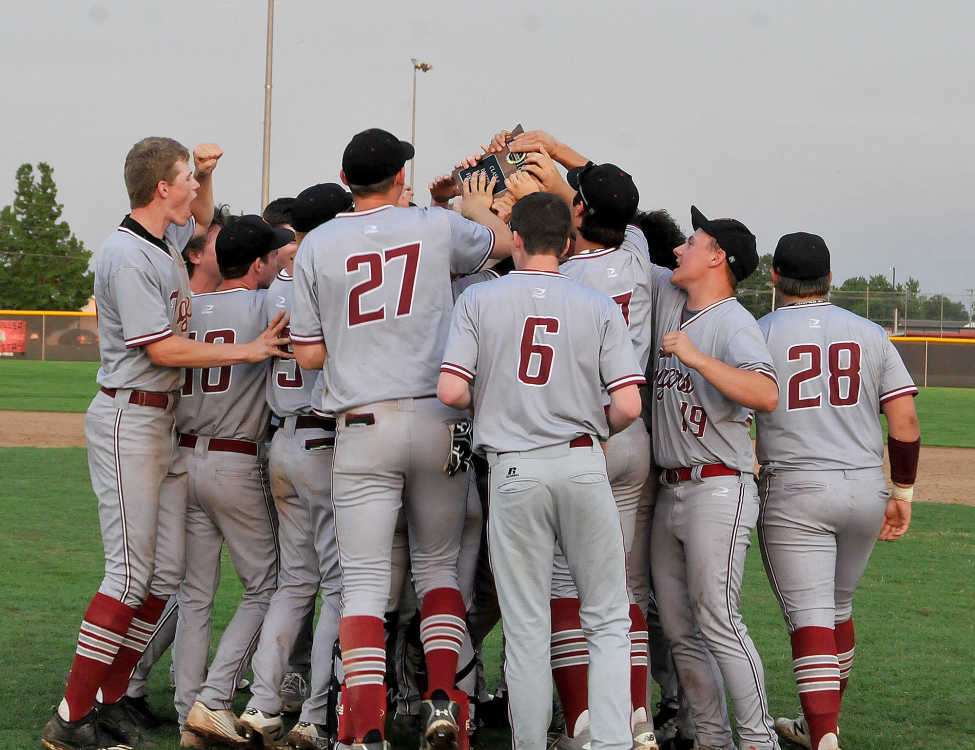 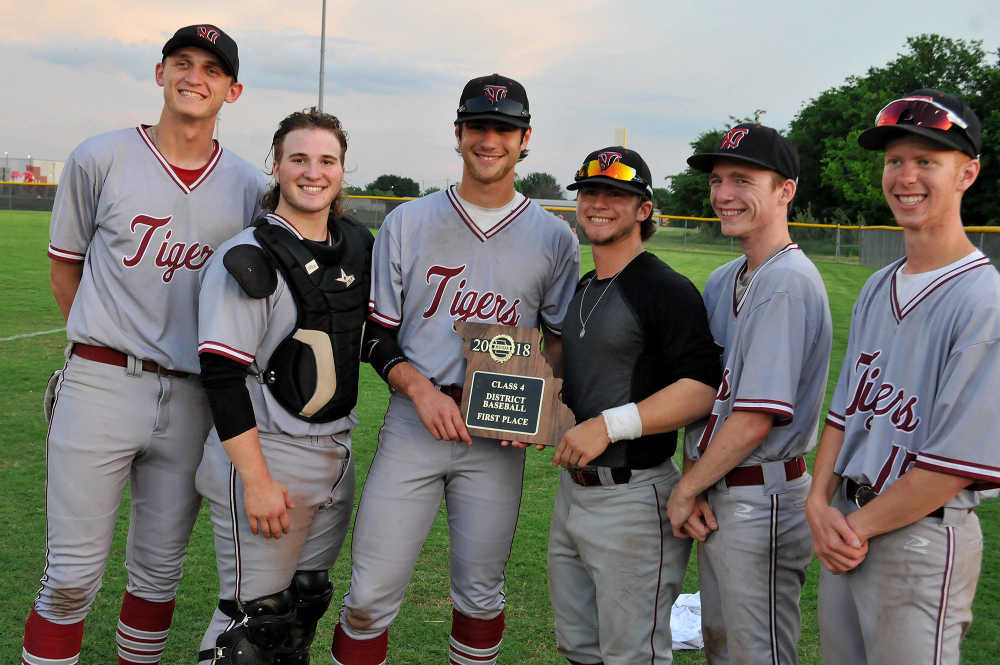