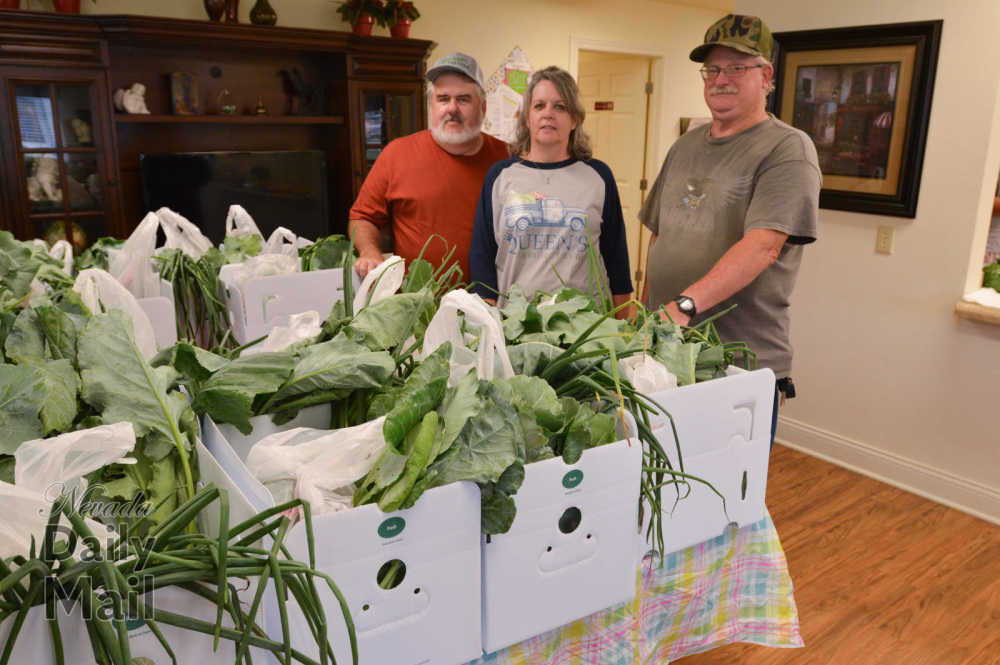 Mike, left, and Lesa Queen and Paul Feagan pose next to boxes of produce and eggs they supplied for a new program called Fresh Food Box which provides fresh food for residents of Spring Village senior housing.
Johannes Brann

It’s called Fresh Food Box and Wednesday was the first day of distribution for this new food initiative at Spring Village senior housing complex. According to the on-site manager, LaDonna Dunn, some 30 of the complex’s residents signed up to receive the first monthly delivery. Spring Village’s ownership, Horizon Housing Foundation, is partnering with Healthy Nevada to purchase fresh vegetables, eggs and in-season fruits along with other occasional items such as beef and pecans through vendors with the Nevada/Vernon County Farmer’s Market. The food is placed in a reusable plastic container which stores flat and is designed to be used across the May through October season of this initiative, which is the season of the N/VC Farmer’s Market. A flyer in the box explains the program, includes a recipe along with a photo and feature on one of the suppliers of items in the box. This month, the green beans, green onions, kohlrabi and lettuce were provided by Mike and Lesa Queen of Queen’s Family Farm, a Missouri Century Farm. The containers of one-dozen eggs were supplied by Paul Feagan who hand washes and refrigerates each egg laid by his 65 chickens, nearly all of which lay brown eggs.