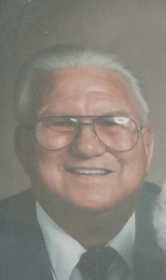 Charles was a loving and devoted husband, father, grandfather, brother and friend. He married Marjorie Sheldon on Nov. 8, 1942, in Cedar Vale, Kan. She preceded him in death after 63 years of marriage. He later married Dolores Bronaugh Hurst on Sept. 5, 2007, in Nevada. She survives at their home in Nevada.

Charles joined the Army but was medically discharged a short time later. He spent his working life as a welder starting out with Boeing Aircraft in Wichita, Kan. He went on to build missile silos in different areas around the central United States. After moving to Bronaugh in the 1960s, he was employed at Missouri State Hospital No. 3 in Nevada where he was given the nickname “Chuckles.” He continued to weld both at work and in his own shop just across the street from his house. After retiring from the State Hospital, his shop kept him busy for many years.

“Love thy neighbor” was something Charles said often but he lived it daily. Everyone was his neighbor: friend, family, stranger and community. He was involved with the Boy Scouts of America as Bronaugh’s Scout Master for many years, was an Eagle Scout, and received the Silver Beaver Award. He served as Bronaugh’s mayor for a time, volunteered on their fire department and was active with the Fall Festival committee. He also spent many Saturday afternoons calling bingo games at Moore-Few when Marge was a resident there and for a time after her death.

Charles loved to be on the go. Sunday afternoons were spent riding with the family, enjoying the beautiful countryside and ending up with a restaurant meal, another of his favorite things. Dancing was something Charles really enjoyed as well. He and Dolores would travel to senior citizen dances near and far as long as he was able.

A committal service will be held in Atchison, Kan., at a later date.