Griffs drop four of past five, run-ruled by Bombers twice in three days 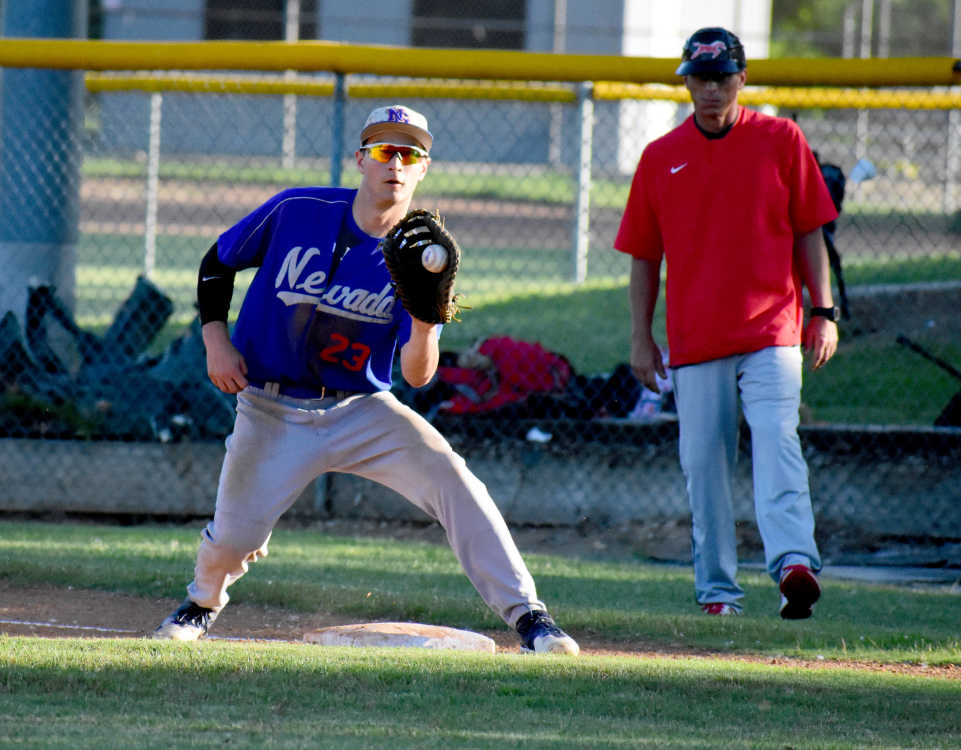 It’s been a rugged five days for the Nevada Griffons.

After dropping two of three to the Clarinda A’s, the Griffons wrapped their four game MINK League road-swing Saturday night in Sedalia, falling to the Bombers, 16-6, in an eight-inning run-rule.

Back home Sunday the Griffons rebounded, notching a much-needed 5-2 victory over the St. Joseph Mustangs.

The good times didn’t last long, however, as Nevada (4-6) returned to Sedalia on Monday and was again run-ruled by the North division’s first-place squad, 11-1 in seven innings.

Three of the four runs Bagenstos yielded were unearned, all coming in the fist inning. Capitalizing on errors and a wild pitch, the opening frame was punctuated by Gavin Jones’ two-out, run-scoring double, as the Bombers went in front, 4-0.

A Dominic Hernandez fourth inning RBI single trimmed Sedalia’s advantage to 4-1. Sedalia responded with a three-spot in the home-half of the fourth, highlighted by Brice Pannier’s two-RBI single, handing the Bombers a 7-1 cushion.

After scoring a run in the sixth, the Griffons sliced the deficit to 7-6, plating four in the seventh, with three of the runs coming on a Hernandez bases-clearing double to center.

The Bombers struck back in the bottom of the seventh, with a Nick Hagedorn bases-clearing base-knock leading to a six run-frame and a 13-6 Sedalia advantage. In the eighth four walks and two hit batters led to Sedalia plating a trio of runs, bringing the contest to a premature close.

Hernandez was a bright spot for the Griffons, finishing 4-for-4, with four RBI. Griffons leadoff hitter Conner Dupuy went 2-for-4, with two runs scored and an RBI. For Sedalia, Hagedorn concluded 2-for-2, while driving in five runs.

Sedalia starter Tyler Clark (1-1) notched the victory, allowing an earned run and striking out two over 5 1/3 innings of work. For Nevada, Bagenstos (1-1) took the loss.

Back home at Lyons Stadium on Sunday the Griffons jumped out to a 3-0 lead.

Nevada followed up a Dupuy second-inning RBI single with a pair of runs in the third. Ben Palenski drove in the first run, and Hernandez plated Josh Bristyan on a fielder’s choice groundout.

For the Griffons, starter Brian Archibald allowed two earned in seven innings of work, and was staked to a 5-1 lead, courtesy of Palenski’s fifth inning two-run blast.

Archibald gave way to reliever David Ruot in the eighth. Ruot walked the first three batters he faced, but struck out the next three. Ruot then stuck out two of three in the ninth, retiring the side in order as the Griffons halted their three-game losing skid.

Sedalia slugger Santiago Garcia lit up the night sky, jacking a pair of homeruns. Garcia first lifted off in the third, with his two-run bomb putting Sedalia on top 3-1.

After plating a run apiece in the fifth and sixth, the Bombers put the contest away in the seventh with a four-run frame.

Astacio Jr. was undone by four singles and a wild pitch, before a bases-loaded walk brought the contest to a close with one out in the bottom of the sixth. For the Griffons, starter Bailey Smith (0-1) took the loss.

The Griffons will try to get back on the winning track tonight as they square off with Sedalia. The first pitch is slated for 7 p.m.