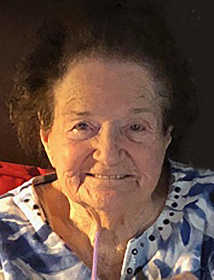 Lucybelle was raised in Locust Grove and graduated from Locust Grove High School. She was a homemaker and also worked for Woolf Brothers Dept. Store in Kansas City as a seamstress for 27 years. Lucybelle and Ben came to Nevada in 1986 where she has continued to reside.

Funeral services will be held at 11 a.m., Monday, Oct. 22, at Ferry Funeral Home in Nevada with the Rev. Hubert Fox officiating. Interment will follow in Newton Burial Park in Nevada. The family will receive friends from 10 to 11 a.m., Monday, prior to the service at the funeral home.