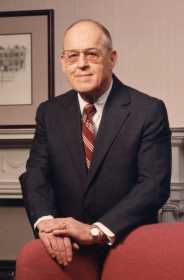 Royal was a 1947 graduate of Nevada High School in Nevada, Mo. and was a 1955 graduate of the University of Missouri in Columbia with a bachelor’s degree in Public Administration.

He proudly served in the United States Army during the Korean War. He was a member of the Veterans of Foreign Wars, Basinger/Sone Memorial Post 1003; American Legion, Roscoe Enloe Post 5; and the Sons of the American Revolution.

Royal joined the Missouri State Medical Association in 1969 and retired as the Executive Vice President in 1994. Before his work as a lobbyist, Royal was a commodity broker and Missouri State Purchasing Agent from 1961 until 1965.

Royal was the first president of the Missouri Society of Association Executives and an honorary member of the University of Missouri – Columbia, School of Medicine, Medical Alumni Organization. He was a member of St. Peter Catholic Church and the Jefferson City Country Club.

Royal was an avid reader so he could be constantly learning about history, genealogy and the current trends of the stock market. He even volunteered with Capital Region Medical Center Foundation Investment Committee and was a lifelong member of the Capital Region’s Board of Governors.

During his retirement, Royal loved traveling all over the world and learning about different cultures. He was a fan of the theater and arts but more than anything, he cherished time with his friends and family. He could be found most mornings having breakfast with friends and giving them trouble with his gregarious personality. He also enjoyed gardening, watching western classic movies, and cooking.

He was preceded in death by his parents; his first wife, Deborah; and two brothers, Lee and Jack Cooper.

Visitation will be held at Freeman Mortuary from 5 p.m. until 7 p.m. Friday, Dec. 14. A prayer service will be held immediately before the visitation at 4:15 p.m., Friday, in the Freeman Chapel.

A Mass of Christian Burial will be conducted at 11 a.m., Saturday, Dec. 15, at St. Peter Catholic Church with the Rev. Charles Pardee officiating. Graveside services and interment with military honors will be held at Riverview Cemetery.