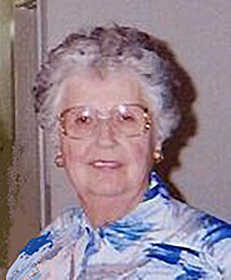 Wanda Faye Abele, 92, departed this life early Saturday morning on March 9, 2019, following a two-week fight with pneumonia. She went home to be with the Lord peacefully and knowing her new home and new body awaited her.

Wanda Faye (Smith) Abele was born on Sept. 20, 1926, near Dederick, Mo., to George and Nannie Smith. She lived in Dederick and also in Green Springs, Mo., in the old hotel of which she often spoke. Green Springs is long gone, but, her son has owned and operated a cattle operation from there for many years now. Wanda would often show and tell of where she played, pretended and wandered.

She graduated from Walker High School at age 16 and went to Springfield to the Southwest Missouri State Teachers College for two years. Wanda returned home and on April 26, 1946, she was married to Calvin Carl Abele, a local boy who had been working for her daddy before enlisting to serve his country in World War II. Calvin, serving as a paratrooper, had returned from the European front and after a short furlough, he was on his way to the west coast toward the Pacific when word of the surrender came. She often spoke of how he was spared and their life together began.

Wanda and Calvin made their home east of Nevada on his parent’s old place and their three children, Myra, Ted, and Kent were born during that time. In 1960, they moved to a new home on an adjoining farm and she lived there until they moved to Nevada in the late 1990s. She had lived at Morningside for a year and was currently a resident of Moore-Few Care Center.

Wanda taught school in a rural one-room school, worked a short stint at the El Dorado Springs Shoe Factory, and as the years marched on, served in the Nevada R-5 School District as a long and short term substitute teacher in several of the elementary schools and also worked at Moss House for several years. She loved teaching. Many memories were created and stories are still being told today.

Wanda was first and foremost, a supporting farm wife, mother, and life-long teacher. She was a good cook, a hard worker, a loving mother and grandmother, and a faithful friend. She was the last living charter member of St. Paul Lutheran Church in Nevada where she served in many capacities over the years, be it council, Sunday School, helping cook and serve meals, and much more.

She was preceded in death by her husband, Calvin; her parents, George and Nannie Smith; and one brother who died at birth.

Funeral services will be held at 10 a.m., Thursday, March 14, at St. Paul Lutheran Church in Nevada with the Rev. Chris Deines officiating. Interment will follow in Mt. Pleasant Cemetery in Dederick, Mo. The family will receive friends from 6 to 7 p.m., Wednesday, at Ferry Funeral Home in Nevada.

Memorials are suggested in her memory to the Moss House in Nevada or Mt. Pleasant Cemetery Association in care of Ferry Funeral Home.