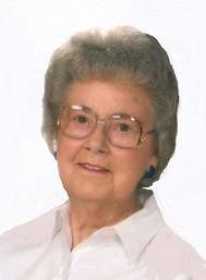 Marion was raised just north of Nevada, she attended Nevada High School until she met the love of her life and followed him to Appleton City, Mo., when she was united in marriage on Aug. 27, 1949, to Casburn Henry “CH” Rains, son of Logan and Georgie Rains, Appleton City, Mo. There they planted their roots at the family farm where they later gave birth to their only son, Kenneth Dale. Marion later joined the work force and was offered a position as a teller at Citizens Bank in Appleton City where she served her customers with the greatest service for 25 years. She attended church in Pleasant Gap, she loved music, dancing, mowing, gardening, grandkids and cooked the best Sunday dinners. She was a devoted and loyal wife for nearly 40 years when she lost CH on Jan. 29, 1989, at her young age of 56. From that day on her life would never be the same but soon after returned to Nevada to be closer to her family and loved ones. She enjoyed many more days chasing grandkids events and spending time with her many brothers and sisters and continued to honor her husband for 30 more years, only admitting to having one other boyfriend, Blake Shelton.

Upon her retirement from banking, Marion enjoyed her life in Appleton City working part-time to stay busy, taking rides to the farm with CH to feed the cows, fishing at the pond with Kenny and Aaron or her favorite activity of shopping at the Bannister Mall with Tracy. Yes, when Marion was younger she was quite an avid shopper and had an affinity to nice clothing and decorating her home very immaculately. This hobby later turned into hitting garage sales around Nevada with Sis and Fern gathering every “barely used Barney” she could find and clothes for all the grandkids that were still “good enough to go rough around in." Grandma Marion was always looking out for her grandkids. When they got older and started having events she always proudly wore several years of booster club buttons on her Tiger Jacket. Of course, she would gladly tell you who she was there to watch, how great they were and if things didn’t go our way we always knew she would comfort us and say, “well we knew when we went out there that someone had to lose”, every time, like clockwork. Anytime Tracy or Aaron had a sick kiddo they always knew they could call grandma and she would gladly watch them and they always knew they would be well cared for, spoiled and a good chance they would have a 3-4 hour nap and be up half the night. Grandma was always there she would always tell everyone, “she just hates it they are sick but she’s glad to keep them." Marion was an avid sports fan and enjoyed watching any football, basketball, or any baseball game she could find on TV, and was ready to go to any Nevada Tiger game that she could get a ride to. Didn’t really matter where you were going or what she was wearing, she was always ready to go. As the days went by, trips to Joplin with her favorite and only daughter-in-law, Susan, became her only travels out of town when they would get arthritis treatments. She was always especially fond of educating Susan and often let her know if there was something she didn’t agree with her on like any mother-in-law would do. But she always knew she was lucky to have her to take her everywhere and often told people she doesn’t know what she would do without her. No matter how crippling her fingers and toes became, she never complained or let you know she was in pain, in fact we would always ask her how she was doing and we always got the same response, “oh slower than I like but I’m a going, that’s the main thing."

The family will receive friends from 11 a.m. to 1 p.m., Tuesday, April 23, at Ferry Funeral Home, in Nevada. A graveside service will follow at 3 p.m., in the Appleton City Cemetery, Appleton City, Mo., with Pastor Jerry Johannigmeier officiating.

Contributions may be made in her memory to the Nevada R-5 Scholarship Foundation in care of Ferry Funeral Home 301 S. Washington, Nevada, MO 64772.