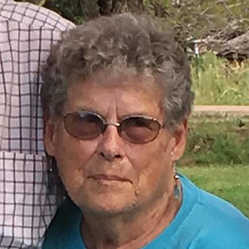 She married Jackie Edward Shreve in 1955, he preceded her in death on Nov. 16, 1960. She then married Reuben Flagor on April 28, 1962, at St. John the Evangelist Catholic Church, Hoisington.

A lifetime Barton County resident, Jean a mother of six children, she began working part time at the Hoisington Dispatch after the children were in school. She later went on to work for Fuller Brush and Superior Essex, and finally for the Eldercare Program from which she retired.

Jean was a member of St. John the Evangelist Catholic Church and Altar Society. Jean was an avid gardener, quilter, card player, and gambler. She and Reuben loved to travel to the many nearby casinos together.

Friends could call from noon to 8 p.m., Monday, at the funeral home with Vigil with Altar Society Rosary was at 7 p.m., Monday, at Nicholson-Ricke Funeral Home Chapel. Mass of Christian Burial will be 10 a.m., Tuesday, April 23, at St. John the Evangelist Catholic Church, Hoisington, celebrated by Father Charles Mazouch. Burial will follow in St. John Church Cemetery.

Memorials may be made to Kans for Kids in care of Nicholson-Ricke Funeral Home, PO Box 146, Hoisington, KS 67544.