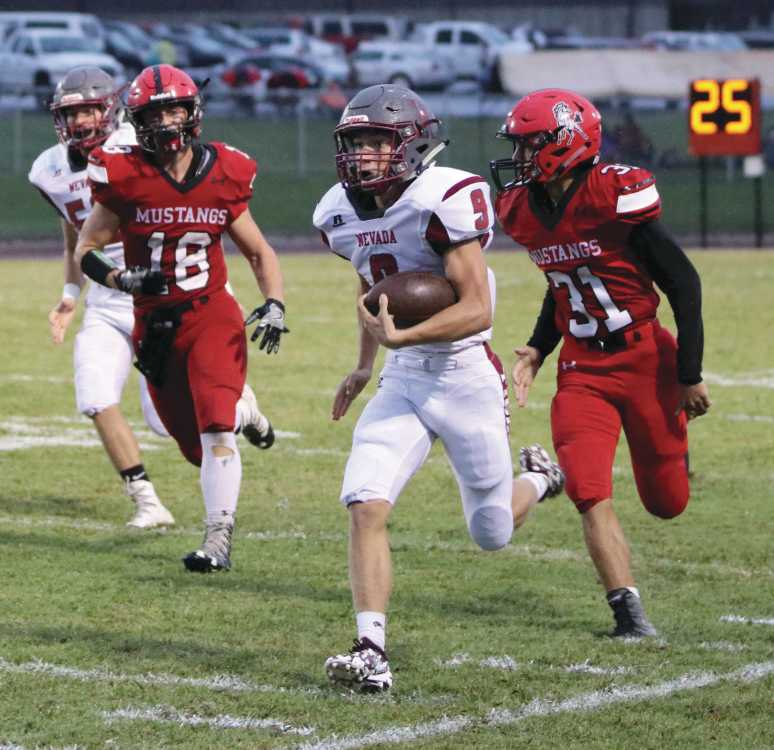 When it rains it pours. At least that seems to be the case for the Nevada Tiger football team.

Beachler confirmed Thursday that the centerpiece of his offense, junior tailback/DB Kaden Denney, is out for the season. Due to MSHSAA regulations, Beachler is not allowed to comment on the precise nature of the injury, but said Denney's mishap, non football related, will sideline him for the remainder of the season.

"Obviously, losing two young men that are starters, who are as good as Trey Moore and Kaden Denney, is a pretty rough deal," Beachler told the Daily Mail after Thursday's practice. "Those two are good enough football players that they did a lot of nice things for us. We'll have to have multiple guys step-up to fill their roles. If we stay healthy from this point forward, we have some guys who are capable of doing that. But obviously, we don't have the explosiveness, nobody has the explosiveness (on our roster) that Denney has on offense. That will be tough to cover the rest of the year."

On a more positive note Beachler said he anticipates the return of top linebacker Jace Lee, (DE) Riley Trotter, and (TE/DB) Matt Thorp. Nevada's starting quarterback last season, Thorp was initially set to assume fullback duties, but will now pick up tailback duties due to the rash of injuries. Thorp is also slated to replace Denney at free safety.

"(Matt) will try to split that load that Denney was carrying," Beachler noted. "Jace Lee will play some fullback in a limited role."

I think getting them back is a boost, because it's three kids who are pretty physical," Beachler said. "Right now, it's not a knock on our kids, but we have a lot of young kids who should be playing (JV) Monday night. And so, those three guys are now Friday night guys. So (their return) should have an impact to some degree, but we still have a lot of holes to fill."

Beachler, now in his 28th season as a prep head coach, said this is the first time he's ever lost his feature back for such a significant chunk of the season.

"And I've never had a year where we're now up to five kids, who (are out) with non-football related injuries or illnesses, all in the first two weeks," Beachler said. "It's been tough to deal with, but we just have to have some guys step up and fill some pretty big shoes."

"We want to clean some things up," he said. "I told our kids tonight, to some degree we're overmatched, because a lot of our kids should be playing on Monday night. This should be their developmental year, and their forced to play on Friday nights. But, we do control ourselves, Mount Vernon doesn't control us. Our effort has to be better, our discipline has to be better, and we have to be more sound on both sides of the ball. I want Mount Vernon to have to earn their yards, instead of having big plays on us. We're going to make them work to earn their yards."

Added Beachler: "Offensively, if we do a better job blocking, we can move the ball three, four yards (per play). We may not have those big runs that we're used to having from Denney, but we are capable of running three, four, five yards (per play), and making things interesting, and that's what we need to shoot for. We need to execute on our end, be around in the fourth quarter, and see what happens."

Witte broke off a 45-yard touchdown scamper on Nevada's opening possession of the season last week. With Thorp on the shelf last week, O'Connell slotted into fullback.

Despite narrowly escaping Monett (22-21) in the season-opener, Mount Vernon checks in at the No. 4 spot on this week's Ozarksportszone.com Top 10 power ranking, which encompasses all classes of Missouri football.

"Their offensive backfield is really strong, experienced, and explosive," Beachler said of Mount Vernon. "The way they run the ball is a strength."

"He managed the offense well," said the veteran head coach. "That's going to be the key, he's going to have to distribute the ball well, and he did a good job of that (last week)."