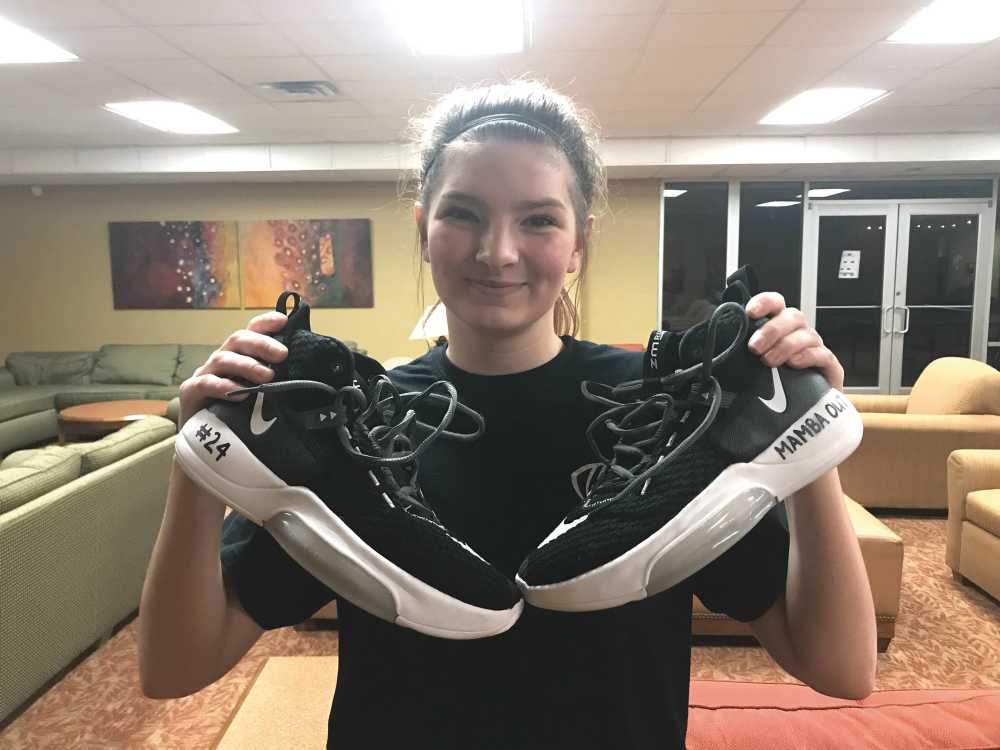 Kobe Tribute: Cottey Comet freshman point guard Olivia Pruitt proudly displays the shoes she wore during Tuesday's home contest with Stephens College. Pruitt paid tribute to NBA legend Kobe Bryant, who was tragically killed in a helicopter crash near Los Angeles Sunday morning. Pruitt honored Bryant by inscribing his No. 24 on her right shoe — and the phrase "Mamba Out" on her left shoe, referring to his nickname. Pruitt, who paced the Comets with 17 points, also pointed to the sky each time she scored. Pruitt was one of several Comets who paid homage to Kobe during Tuesday's game.
Photo by Matt Resnick | Daily Mail

A close contest was broken open in the second half Tuesday evening at Hinkhouse Center, as the Cottey Comets were defeated by visiting Stephens College, 64-54.

The result was a reversal from the teams' previous matchup Nov. 12 in Columbia, as the Comets bested Stephens, 63-50.

Cottey (7-12) has fallen on hard times of late, as the 10-point loss extends their losing skid to four.

Cottey's primary weakness was its interior defense, as Stephens College center Maddison Schaeffer detonated for a game-high 28 points, including several key buckets late in the contest.

The Comets trailed 23-14 at the conclusion of the opening frame, but trimmed the deficit to 32-30 at the half after outscoring the visitors 16-9 in the second.

The Comets came out red-hot to open the second half, as a 9-2 run, capped off by a Kelsey Acton bucket handed Cottey its largest lead of the game, at 39-34.

A Tatem Edeler offensive rebound and lay-in kept the Comets in front, 41-37 at the midpoint of the third. Stephens, however, close out the frame on an 11-0 blitz, for a 48-41 lead entering the fourth.

Cottey opened the fourth on a 6-1 spurt, punctuated by point guard Olivia Pruitt's traditional three-point play, and trailed 49-47 with 5:03 remaining in regulation.

From there Schaeffer took over, scoring at-will in the post, as Stephens stretched their advantage to 59-48 with 1:50 remaining.

The Comets didn't go quietly, as a Pruitt lay-in sliced Stephens' lead to 60-54. On the ensuing possession, with under a minute remaining, Cottey came up with a steal in the backcourt, and had a chance to trim the deficit to one possession, but Acton's 3-pointer was off the mark.

Pruitt tallied a team-high 17 points, while Acton chipped in 10.

The Comets shot 31 percent from the field for the contest, but were ice cold from long-range, connecting on just 3-of-21 3-point attempts, including 0-for-10 in the first half.

In their previous contest on Jan. 25, the Comets were edged by Crowley's Ridge College, 76-72 — in Paragould, Arkansas.

The Comets return to the hardwood Saturday for a 4 p.m. road-clash with Lincoln (Neb.) Christian College. They then follow-up on Super Bowl Sunday, with a 1 p.m. matchup against Lincoln College.