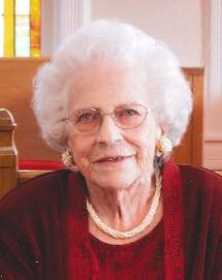 Following high school, she studied for her teaching certificate at Southwest Missouri Teacher’s College (now Missouri State University). She then taught in several Vernon County country schools as she continued her education. During WWII, she worked in the Adjutant General’s Office in Kansas City.

She married Theodore (Ted) Sheridan on June 30, 1945, shortly after his return from the war where he had been a Prisoner of War. They lived in Wichita, Kan., for a short time before returning to Sheldon where together they operated Sheridan Farms. Ted passed away on June 13, 1997.

Darlene was a substitute teacher for many years at Sheldon School.  She was involved with many civic organizations including: Vernon County Democrats, 4-H, PTA, American Legion Auxiliary, Eastern Star, Sheldon Library Board, POW Survivors and Spouses and Sheldon Extension Club, Sheldon Picnic Association, Charter member of Sheldon Housing Corporation and Sheldon Senior Citizens. She was honored as Grand Marshall of both the Sheldon Christmas and Sheldon Picnic parades.

She served for many years as Secretary of the Sheldon School Alumni Association and of the Phipps Family Reunion.  She was a life-long member of Sheldon Christian Church. Preservation of the original Sheldon High School building was her most recent project.

Her children and grandchildren were the focus of her life. Her benevolence, commitment, determination and generosity to her family, friends and community are appreciated by all who knew her.

Funeral services are scheduled for Saturday, March 7, at 1 p.m., at Sheldon Christian Church. Interment with Eastern Star services will follow in Sheldon Cemetery. Visitation will be held on Friday, March 6, from 6 to 8 p.m., at Ferry Funeral Home, in Nevada.