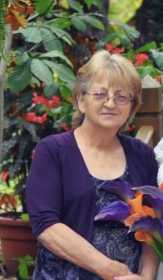 Marcia Kay Somers of Ada, Kan., passed away peacefully in her home on April 16, 2020. She was surrounded by her loved ones and the ones she loved the most.

To those who loved her, she was "Mema." Marcia grew up in Minneapolis, Kan., and after her marraige and the birth of her oldest children, lived in Texas, later settling in Nevada, Mo., in 1986. In 2008, she and her husband retired to their original hometown and settled in Ada, Kan.

Marcia spent most of her working life in health care as a CNA. But, her favorite and most important calling was that of wife, mother and "Mema." Family was most important to Marcia and she passed as she strived to live, in the care and comfort of her loved ones.

Marcia is preceeded in death by her parents; twin grandaughters, Melanie and Angel Somers; stepgrandson Kelly Masters; and a son-in-law, Andrew Johnson.

A celebration of her life will be announced at a later date.

In lieu of flowers memorials to the family for help with final expenses can be mailed to: Brenda Masters, P.O. Box 373. Lamar, Mo. 64759