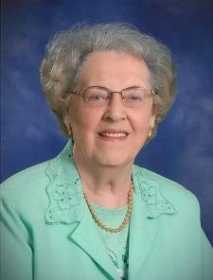 They honeymooned at Niagara Falls, and then travelled to their farm southwest of Golden City, Mo., where they engaged in a crop and livestock operation for 45 years. This farm was later designated a Missouri Century Farm. In addition to being a farm wife, Phyllis enjoyed playing piano for the Dudenville United Methodist Church, gardening, sewing, knitting, cooking, taking care of numerous pets, always sending encouraging cards and letters to family and friends, and maintaining a loving home.

Oscar and Phyllis moved to Nevada, Mo., in 1992 and became members of the Nevada First Baptist Church.

She was preceded in death by her husband of 53 years who passed away in 2000; son-in-law, John Stockdale; sisters-in-law, Audrey Yates and Lorene Wheat. Also, parents, Charles and Lily Morement; sister, Joyce Denning; and brother-in-law, George Denning all of England.

She is survived by a son, David (Glenda) Clyman of Nevada, Mo.; a daughter, Marilyn Stockdale of Sheldon, Mo.; two grandsons, Jeremy (Jennifer) Clyman of Grain Valley, Mo., and Jason (Whittney) Stockdale of Oronogo, Mo.; one granddaughter, Julie Morgan of Pella, Iowa; five great-grandchildren, Ella and Colton Clyman, and Paige and Tyler Morgan, Emma Stockdale; as well as many nephews and nieces.

Graveside services are planned for 2 p.m., Thursday, May 7, at the Dudenville Cemetery, south of Golden City, Mo., with the Rev. Kevin Daughtery officiating. Friends may call now and until the hour of service at Ferry Funeral Home in Nevada.

Memorials are suggested to the First Baptist Church in Nevada or the American Diabetes Association.